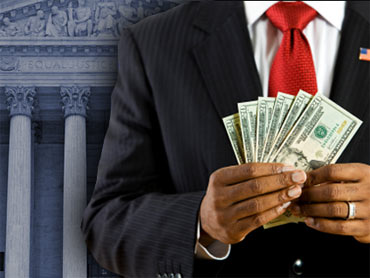 (CBS/AP)
In a 5-4 decision that will cause major upheaval in political campaigns, the Supreme Court this morning struck down limits on campaign expenditures by corporations and unions -- a key plank in campaign finance laws.

As a result, corporations and unions will be able to spend money to air unlimited television ads in the run up to an election. The biggest impact may well be on the candidates -- they now are in real danger of losing control over their messages, as outside groups can dramatically outspend them.

I just left the courtroom, where justices spent 30 minutes on the bench discussing this landmark case. Justice Anthony Kennedy, reading from his majority opinion, emphasized that Congress may not censor or regulate political speech, whether it's a person doing the talking or a corporation or union.

That's at the core of the First Amendment, Kennedy said, and laws banning speech infringe those basic constitutional protections. Kennedy also pointed out that under those laws, Congress also could diminish the voice of the media business if it chose. Government, he said, may not suppress political speech on the basis of a speaker's identity.

Also significant: the court upheld disclosure requirements -- saying the public has a right to know who is behind the ads. Kennedy stressed the need for transparency in the process -- the public can see the ads, see who's paying for them and is smart enough to figure out what's behind them.

Stevens said the Court and Congress and the public for the last 100 years thought corporate speech could be regulated. He accused the Court of a "radical shift" in the law that will allow corporations to drown out political speech of candidates and increase public cynicism in the political process.