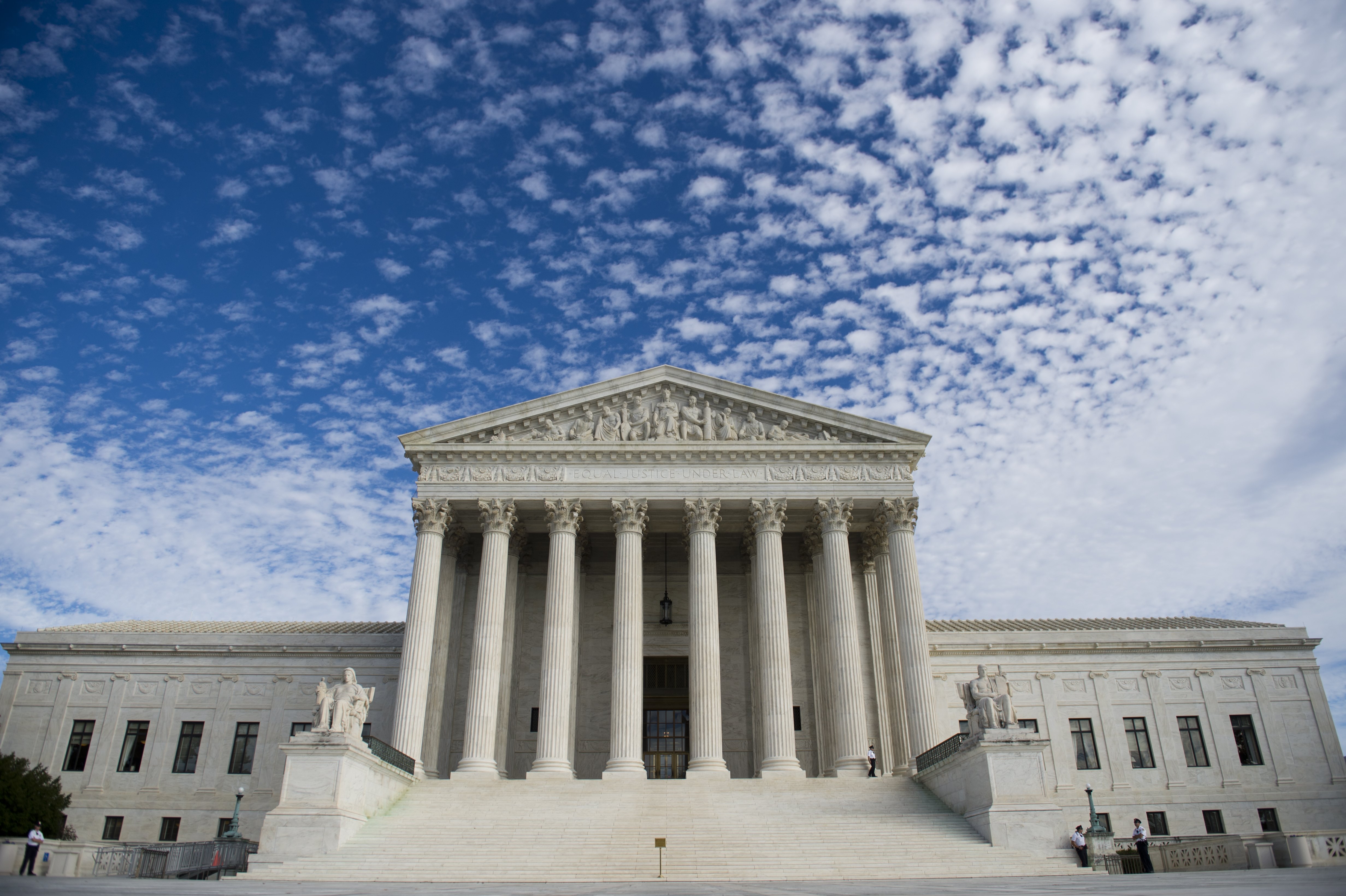 Some of the most politically divisive themes and issues of the 2012 election -- Obamacare, the left's "war on religion," the right's "war on women," and the notion of corporate personhood -- all come into play in two cases that will be argued before the Supreme Court on Tuesday.

Two privately-held, for-profit companies -- Hobby Lobby Stores, Inc. and Conestoga Wood Specialties Corp. -- are suing the United States government over a provision in the Affordable Care Act that requires large employers to offer their workers comprehensive health coverage, including contraception, or pay a fine. Hobby Lobby's owners, David and Barbara Green of Oklahoma, say they have strong objections based in their Christian faith to providing health care coverage for certain types of contraception. The Pennsylvania-based Hahn family, the Mennonite owners of Conestoga Wood Specialties, have the same complaint.

For Christian conservatives, the cases represent the threat of government overreach.

"This case will decide whether a family gives up their religious freedom when they open a family business," Lori Windham, a senior counsel for the Becket Fund, which is representing Hobby Lobby, told CBS News. "The question here is whether the Green family can be forced to do something that violates their deeply held religious conviction as a consequence of the new health care law."

Reproductive rights advocates, meanwhile, consider the notion that some businesses could pick and choose which contraception methods to cover "out of touch [and] out of line," Ilyse Hogue, president of NARAL Pro Choice America, told reporters.

Contraception is "integral with our economic security and our ability to hold jobs for our lifetime," Hogue said. "We've had enough of this idea our reproductive health is somehow separate from our economic well being... Our bodies are not our bosses' business."

The two cases, however, have implications that go well beyond the so-called "wars" on women or religion. If Hobby Lobby and Conestoga prevail, it would prompt "a fundamental shift in the understanding of the First Amendment," David Gans, the civil rights director for the Constitutional Accountability Center, told CBS News.

That shift in thinking could open the floodgates for unprecedented protections for corporations that some say amount to a license to discriminate. The ramifications could be felt nationwide, in states that are enacting laws to shield businesses from regulations that may violate their "religious beliefs." Gov. Jan Brewer, R-Ariz., last month vetoed one such bill, which would have allowed Arizona businesses to refuse to serve gays on religious grounds. A number of other states across the country have been considering similar legislation.

The ramifications could theoretically go further than that. U.S. Solicitor General Donald Verrilli argued in a brief to the court that siding with Hobby Lobby "would entitle commercial employers with religious objections to opt out of virtually every statute protecting their employees" -- such as laws that ban gender discrimination, minimum wage and overtime laws, the collection of Social Security taxes, or mandated health coverage for vaccinations.

The basis for Hobby Lobby's case is the Religious Freedom Restoration Act of 1993, which dictates that an individual's religious expression shouldn't be "substantially burdened" by a law unless there is a "compelling government interest."

The court must first decide whether this law even applies to for-profit corporations like Hobby Lobby -- in other words, whether corporations have the freedom to exercise religion that's granted to individuals under the First Amendment. In this sense, the Hobby Lobby and Conestoga cases are the next iteration of Citizens United, the case 2010 case in which the Supreme Court ruled that corporations have the same freedom of speech guarantees afforded under the First Amendment as individuals.

"I do think the question of corporate personhood is at the heart of the case," Gans told CBS. "Do corporations have these fundamental rights of human dignity and conscience that they've never tried to claim in the past?"

There are, however, noteworthy differences between these cases and Citizens United. Before Citizens United, there was a body of precedent granting corporations freedom of speech in advertising, Gans said.

"The theory was when corporations were selling a product -- or as in the case of Citizens United, trying to influence the outcome of elections -- that sort of act of expression helped shape public debate, helped shape consumers' understanding of products," Gans said.

By contrast, there's no precedent that the Supreme Court can rely on to find a freedom of religion right for corporations. "The fundamental idea of the religious right is one of conscience, human dignity -- human attributions that don't really apply well to corporations."

The Supreme Court took up a similar case in the early 1980s, after an Amish farmer argued that paying Social Security taxes on his employees' wages violated his beliefs. The court unanimously ruled against the farmer in United States v. Lee. Chief Justice Warren Burger wrote for the court, "When followers of a particular sect enter into commercial activity as a matter of choice, the limits they accept on their own conduct as a matter of conscience and faith are not to be superimposed on the statutory schemes which are binding on others in that activity."

On the other hand, Windham of the Becket Fund points out since the passage of the Religious Freedom Restoration Act, the court has recognized the religious rights of religious corporations. For instance, the court ruled unanimously in 2006 that the federal government could not confiscate a hallucinogenic tea from a New Mexico religious corporation (which considered the tea a sacrament), even though the tea was barred under federal drug laws.

The key difference between that case and those before the court on Tuesday is that the court is now dealing with for-profit corporations -- not nonprofits. In fact, nonprofits with religious affiliations, such as Catholic universities, are already exempt from the Obamacare contraception rule.

"The government says that nonprofit versus for-profit is the dividing line -- that is a really bad dividing line," Windham said. "That would mean the NFL, which is a nonprofit, has religious rights but Mardel Christian Bookstores does not." (Mardel, a bookstore chain that the Greens own along with Hobby Lobby, is also challenging the Obamacare mandate.)

If the court buys that Hobby Lobby has rights under the Religious Freedom Restoration Act, Hobby Lobby would then have to prove that it has been "substantially burdened" by a law for which there is no "compelling government interest."

The court could cite a number of reasons why the Obamacare rule doesn't amount to a substantial burden. For one thing, the court could point out that in lieu of providing insufficient health care coverage to its employees, Hobby Lobby could simply pay a fine to the government.

That fine would, in fact, cost less than the expense of providing health coverage to Hobby Lobby's employees. The government would then use that money to support the new Obamacare marketplaces, where Hobby Lobby employees could then find comprehensive coverage.

This rationale would be similar to the logic the Supreme Court put forward when it upheld the Obamacare individual mandate in 2012 -- in that case, the court ruled that the rule requiring all Americans to obtain insurance or pay a fine did not amount to a "mandate" but to a tax.

Windham said it's illogical that "a company that complies with 99 percent of the Affordable Care Act -- just because it doesn't comply with 1 percent -- should drop their coverage altogether."

Hobby Lobby's owners would feel compelled to compensate its employees for those lost benefits, which would be an additional burden on top of the fine, Windham said.

Even if there is a substantial burden on Hobby Lobby, compelling government interests could overrule that.

"Studies show what common sense tells us," she said. "Access to birth control increases women's participation in the workforce and contributes to an increase in women's wages."

The Supreme Court said as much in 1992 in Planned Parenthood vs. Casey: "The ability of women to participate equally in the economic and social life of the Nation has been facilitated by their ability to control their reproductive lives."