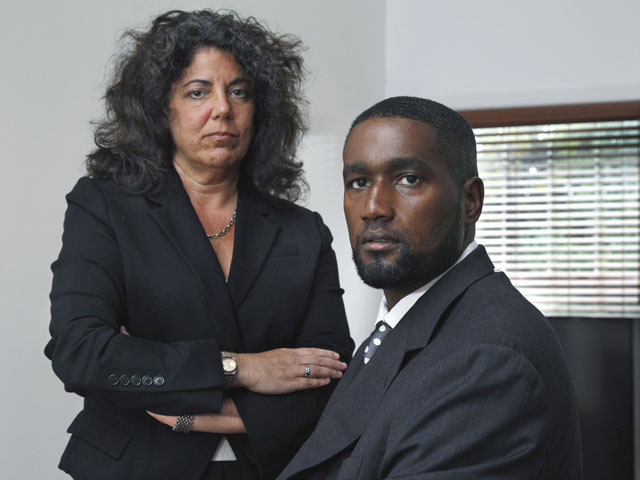 WASHINGTON - The Supreme Court seemed ready Wednesday to endorse a jail policy that forces even people arrested on minor charges to undress and shower while being watched by guards.

Less clear was whether justices would decide jailers need a reason to suspect someone may be hiding a weapon or drugs before undertaking a more invasive strip search. The court heard arguments in a case weighing the privacy rights of people in jail against authorities' need to maintain safety.

It's the case of Albert Florence, the finance manager for a New Jersey car dealership, who was arrested on a warrant for an unpaid fine. Florence says he was twice required by jail guards, who stood close by, to undress, open his mouth and lift his genitals. On the second occasion, he also had to bend over and cough, in case he was hiding something inside his body.

Jail officials and the Obama administration back a policy that allows close searches of anyone entering the general jail population.

"What I would really like is an opinion that recognizes that deference to the prison and to their judgment is what's appropriate under these circumstances," Carter Phillips, the jails' lawyer, told the court.

But Thomas Goldstein, representing Florence, said the court should draw a line that limits intrusion into someone's privacy when there is no cause to suspect he is hiding anything.

Florence was arrested after a state trooper pulled over the family's BMW sport utility vehicle as they were headed to dinner with his mother-in-law in 2005. His wife, April, was seven months pregnant at the time and driving. Their 4-year-old son was in the back seat.

"When somebody is pulled over like Mr. Florence, it's laugh-out-loud funny to think he is smuggling something into this jail," Goldstein said. In addition to the searches, Florence is challenging his arrest because he already had paid the fine — and carried a document to prove it — and challenging his detention in two jails for a week without a hearing. Those matters are on hold pending the outcome of his high court case.

As happens often, the justices appeared more concerned with the wider implications of any decision they might reach than with the specifics of the case before them.

The justices focused a lot of questions on how close guards can get to naked inmates and how thorough searches can be. "He says 2 feet is too close, 5 feet or whatever is OK," Chief Justice John Roberts asked Phillips. "You want to go to 2 feet. You don't want to have to stand back to 6 feet. That's all the case comes down to?"

Justice Stephen Breyer questioned whether the distinction between major and minor crimes makes sense. He pointed to San Francisco's experience showing that many people arrested for minor crimes are "high on drugs" when they are brought in, and perhaps should be subjected to closer searches.

Goldstein acknowledged that it wouldn't take much to allow "the very close inspection of the individual's genitals, which can occur absolutely so long as there is some minimal level of suspicion that's created."

Several justices said that it might be safer, even for people like Florence, to give jails permission to search everyone thoroughly.

Justice Anthony Kennedy asked whether someone in that situation "might well prefer an institution where everyone has been searched before he or she is put into the population."

Yet there also were many questions about the rationale for the searches — deterring smuggling.

Justice Sonia Sotomayor said recent studies show that most contraband that gets into jails and prisons is not arriving with the inmates themselves, "but coming in through guards, coming in through contact visits."

The court ruled more than 30 years ago that prison inmates could be strip-searched following visits.

Phillips asked the court to apply the same rule to people who are entering the general jail population, although he conceded one point under questioning.

"I think what is disturbing about this case is in fact that he was arrested under circumstances in which he candidly shouldn't have been arrested as a matter of state law," he said.

A decision should come by spring.

The case is Florence v. Board of Chosen Freeholders, 10-945.