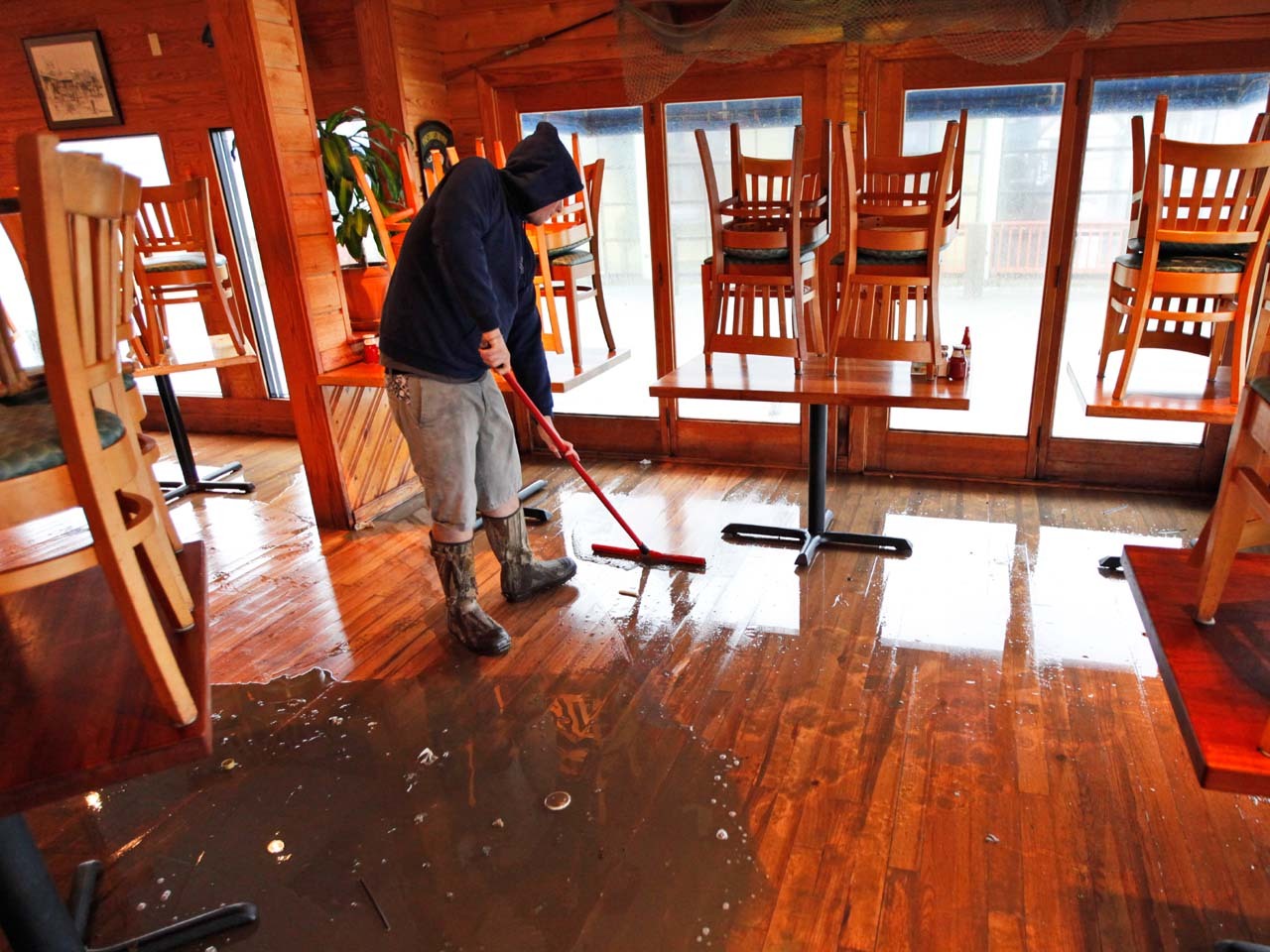 At Angelo's Civita Farnese, a restaurant in Providence, R.I., the lunchtime crowd didn't materialize and few customers were expected for dinner. By 12:30 p.m. -- hours before the worst of the storm was expected to hit -- there were about 10 customers inside, and owner Bob Antignano had no hopes of getting the usual 200 to 250 he usually serves for lunch. He had a smaller staff prepare fewer meals than usual, but most of the food was going to have to be donated to charity.

"It's a wasted day and it looks like tomorrow probably will be as well," Antignano said.

For many small businesses, opening depended on whether employees lived close by or could work remotely. Businesses vulnerable to wind and water damage and power outages were forced to close. The storm also ruined business trips, meetings and presentations.

Antignano serves between 400 and 500 meals a day between lunch and dinner. The loss of two days' revenue will wipe out his profit for the month. He would suffer losses if the restaurant lost power. He would have to close, and the food in his walk-in refrigerator and freezers could spoil.

The storm also created woes for small business owners based in other parts of the country.

Anupy Singla of Chicago had to cut short a visit to New York to promote her new cookbook, "Vegan Indian Cooking." She was able to squeeze in an appearance at a Williams-Sonoma store in Manhattan before it was forced to close. But a cooking class that she was scheduled to hold for 55 people on Monday night had to be canceled. She missed out on selling her book at that event, and she also had to cancel plans for other activities to promote her book and her Spice Tiffin, a container that she designed to hold Indian spices.

"It's been kind of a hellish week," Singla said. Because the Manhattan grocery stores were overcrowded with people stocking up on water and canned goods for the storm, she was unable to buy the ingredients she wanted to for her Williams-Sonoma demonstration. But being an experienced cook, she managed to improvise and came up with an Indian hash browns dish.

Singla knew before she began the demonstration that she would have to get out of town before the storm hit and return to Chicago. She spent about $1,000 on the trip, but without the return on that investment she'd hoped for. So she's planning to return early next year.

But the storm was almost a non-event for Mario Almonte's Manhattan publicity firm. The 10 staffers of Herman & Almonte Public Relations worked from their homes scattered around the New York metro area.

Almonte said his staffers were doing their normal work, writing press releases and doing research for projects for clients. "I hardly feel it. We've done this before, anytime one of us has to stay home and log in and just stay in touch," he said.

One of New York City's most popular upscale restaurants, Gramercy Tavern, was among the many eateries that were closed. Managing partner Kevin Mahan said the decision to shutter the restaurant came Sunday after officials said they would close the city's transit system.

"We decided based on the ability of our staff to get to and from work," Mahan said. The restaurant normally has 180 staffers. Sunday night, it had only 30 and kept only the front part of the restaurant open.

Mahan said it wasn't yet known whether the restaurant would open Tuesday. But if it does, it would again have only limited seatings.

The storm also forced the cancellation of a presentation that Steve Levine planned to make at a trade show in Manhattan -- but he's expecting that even if he lost business Monday that the storm may end up helping him in the end. Levine's Fairfield, Conn.-based AtmosAir Solutions makes air purification systems for large buildings. The trade show at the city's Javits Center, a convention mecca, was called off when the transit system shut down.

Levine, who was using his cell phone to work at home Monday during the storm, said the damage caused by rain and flooding could lead to more buildings needing his services.

"We think this could be an opportunity to help a lot of people," he said.