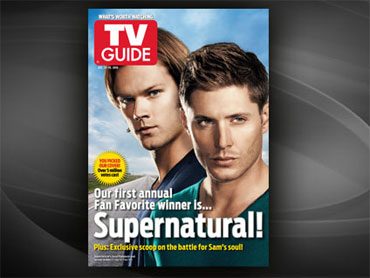 The December 13 cover, featuring "Supernatural" co-stars Jared Padalecki and Jensen Ackles, will be on newsstands December 9.

On "Supernatural," Padalecki and Ackles play brothers trying to save the world in the classic good versus evil paradigm.

She said she wanted to let the readers and viewers choose their favorite program out of six pre-selected programs across the major broadcast networks that fit this "cult" criteria, and have the prize be the cover.

"Nielsen rates the top 20 shows, but there's a lot Nielsen can't capture. They're looking at ratings, but not passion or dedication. We tried to pick shows that really reflected all of that. Things like social media have brought forward, Twitter and Facebook giving fans a real voice to talk about what they love about their favorite shows."

Voting took place from October 19 to November 1, 2010 and fans could vote as often as they liked: 5.5 million votes were cast over the two-week contest period.

"Supernatural" is currently in its sixth season. "Supernatural" won over Fox's "Bones," ABC's "Castle," NBC's "Chuck," CBS' "How I Met Your Mother," and CW's "Smallville."

For more on the cover with Birnbaum, click on the video below.