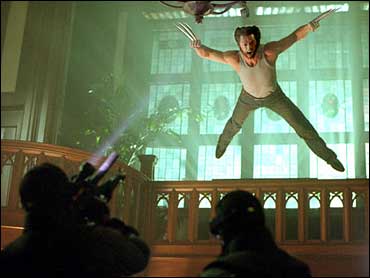 A surplus of superheroes, to be more precise.

Along with the new sequel "X2: X-Men United," other comic book-inspired films this year include the already released "Daredevil" and "Bulletproof Monk" and upcoming adaptations of "The Hulk" and "The League of Extraordinary Gentlemen."

The built-in audience for these films grants studios that most coveted of superpowers: the ability to make piles of money, not only from sequels but from merchandise - and spin-offs.

The "X-Men" franchise, which in 2000 helped fuel the current comics renaissance, is particularly fertile for follow-ups because of its ensemble nature.

Both films focus on rival groups of mutants - some militant, others peaceful - who are despised by regular humans for their varying abilities to disrupt weather, sling fire, read minds, manipulate metal and shift shapes.

"I would love to break off every one of these characters into their own movies," said Lauren Shuler Donner, producer of "X-Men" and "X2."

Which all could feed a superhero glut.

Sony already has a "Spider-Man" sequel in the works with stars Tobey Maguire and Kirsten Dunst, while 20th Century Fox is developing a film about the irradiated family of "The Fantastic Four" and a follow-up to "Daredevil" based on its blind crime fighter's resurrected girlfriend, Elektra, with Jennifer Garner reprising her role.

Artisan has hired Thomas Jane to play the Marvel Comics street vigilante "The Punisher," while New Line is developing a film about the metal-encased "Iron Man" and a third film with Wesley Snipes as the vampire hunter "Blade."

Meanwhile, Warner Bros. is taking advantage of its ties to DC Comics. "Memento" director Christopher Nolan is overseeing a new take on "Batman" for the studio while Halle Berry has signed on for a separate project about the feline foe "Catwoman."

A series of major flops, however, could make audiences tire of comic book films.

"They're not just cranking them out like sausages yet, and that's a good thing," said Michael Dougherty, co-writer of "X2." "But the point where it will become dangerous is when they'll start making them overnight, like 'Oh, let's jump on the bandwagon really quick and start cranking stuff out even if the script sucks and grab whatever name-actor we can."'

While superhero films were a staple of low-budget serials in the 1940s and '50s, the genre fused with big-budget special effects in 1978's "Superman," starring Christopher Reeve. After the well-regarded "Superman II" in 1980, fans lost interest when the series collapsed into campy comedy and political preachiness over two more movies.

Director Tim Burton's 1989 "Batman" and 1992 "Batman Returns" became hits with somber, macabre visions of the Caped Crusader, but the series suffered the same fatal dose of corniness as the "Superman" franchise when director Joel Schumacher took over the next two films, "Batman Forever" (1995) and "Batman & Robin" (1997).

Other comic-book movie misfires over the past 15 years include the flops "Mystery Men," "The Phantom," "Spawn" and "Josie and the Pussycats." A 1990 version of "Captain America" was dumped straight to home video.

For now, producers of superhero films are hoping to learn from those mistakes and maintain fan loyalty with better special effects, darker storytelling and faithfulness to the original comic books.

"Hopefully, if we've done our job right on this one, audiences will find our characters interesting enough that they'll go back despite what's out in the marketplace," Shuler Donner said. "On the other hand, who knows? Maybe each success of each film helps the next one."

A top contender for a solo "X-Men" spin-off, she said, is Wolverine (played by Hugh Jackman) whose ability to rapidly heal led to an experiment in which an indestructible metal skeleton and claws were grafted to his body.

Jackman said he would be game to reprise Wolverine in other films because recent screen superheros are more nuanced and vulnerable than previous incarnations.

"He makes mistakes. He's irreverent. He's got issues," Jackman said of his character. "He could do with a whole batch of therapy and still be a long way from being happy. He's more layered. It's much more interesting to play that than the good guy who has it all together."

Darker storytelling also has helped some superhero-based films attract stars who previously had little interest in the fantasy format.

Nick Nolte, who plays the father of a man who becomes the chaotic, green menace in "The Hulk," was persuaded to take the role because director Ang Lee, best known for "Crouching Tiger, Hidden Dragon," described it as "a father-son tragedy."

Not all superheros are making an easy transition back to the screen, however.

Warner Bros.' plan to revive "Superman" on the big screen hit a roadblock recently after a series of top-tier actors balked at taking the role. A previous false start for the Man of Steel came in the late 1990s, after Burton and Nicolas Cage abandoned plans for a film called "Superman Reborn."

"Superman" does live, however, on the small screen. The WB network's "Smallville" has become a hit by chronicling the teenage years of Clark Kent as he grows into his powers.

Actress Allison Mack, who plays a teenage reporter with a crush on Kent in "Smallville," said part of the show's appeal is showing a budding Superman in his awkward and vulnerable phase.

Only his teenage angst involves heat vision and the ability to leap across tall buildings in a single bound.