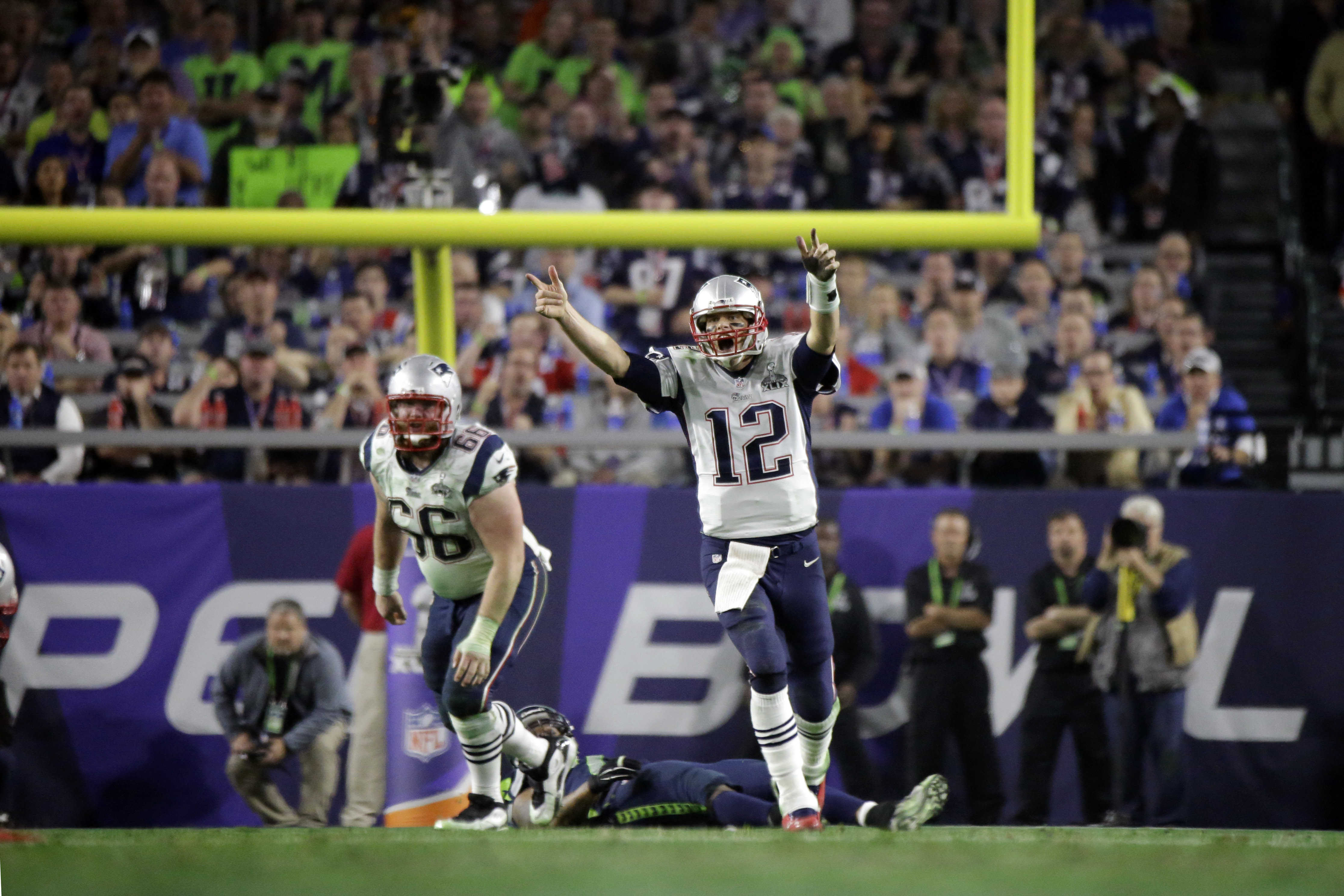 GLENDALE, Ariz. - The New England Patriots stopped the Seattle Seahawks from repeating as NFL champions in Super Bowl XLIX with a goal line interception in the last minute of the game after what seemed to be a the Seahawks taking advantage of a nearly dropped pass that placed them within yards of a win.

But Russell Wilson's pass into the endzone was picked off by cornerback Malcolm Butler, ending the Seahawks' chances of winning, and vindicating the Patriots after two weeks of controversy 28-24.

A touchdown pass caught by New England Patriots wide receiver Julian Edelman gave them the lead permanently over the Seahawks.

The play, coming just before the two-minute warning in the fourth quarter has put the Seahawks in a position of needing a touchdown in order to win the game. It signified the intensity quarterback Tom Brady has placed on the pass, utilizing long throws and lengthy drives.

New England Patriots quarterback Tom Brady, refusing to be defeated so fast, continued to fight for a win with a bullet pass to receiver Danny Amendola in the fourth quarter putting them just behind the Seattle Seahawks 24-21 in Super Bowl XLIX.

Down 10 to start the fourth, the Patriots' defense held as Rob Ninkovich sacked Russell Wilson to force a punt. After Brady was sacked on the first play, he drove the offense 76 yards to get New England within a field goal. Brady set an Super Bowl record with his 11th career TD pass to Amendola in the back of the end zone.

Earlier, the game began to turn in the Seahawks' favor with a catch by wide receiver Doug Baldwin to put them ahead of the New England Patriots 24-14.

Baldwin's catch came off a three yard pass from quarterback Russell Wilson who got open easily to find the reciever in the endzone, which bolstered the team and forces the Patriots to come up with some carefully crafted plays to catch the Seahawks momentum.

Unknown receiver Chris Matthews had a breakout game in the first three quarters, making his first four career catches for 109 yards, helping to tie the game 14-14 before the half. Matthews, a cousin of Hall of Fame defensive end Reggie White, played in just three games before he made the crucial onside kick recovery in the NFC title game against Green Bay.

The leaping catch gave Matthews two receptions in the game for 55 yards. The score came after the New England Patriots mounted a serious effort to control the half with touchdown passes from quarterback Tom Brady to Brandon LaFell and Ron Gronkowski.

After Tom Brady threw an 11-yard touchdown pass to LaFell, the Seahawks responded with their best drive of the game. Matthews - who made the crucial onside kick recovery in the NFC title game - made a twisting catch over Kyle Arrington for 44 yards to the Patriots 11.

Two runs later, Lynch scored on third-and-goal. Brady bounced back after throwing an interception in the end zone to throw his NFL record-setting 50th postseason TD pass on the next drive. Brady picked on cornerback Tharold Simon, who replaced the injured Jeremy Lane on the drive.

Brady engineered a 58-yard drive that lasted 7:20 before throwing a pick from the 10 on third-and-6. Brady threw off his back foot and took a crunching hit from Michael Bennett and Cliff Avril after he released the ball.

Lane made his first career interception and weaved his way to the 14 before Julian Edelman knocked his own helmet off while making the tackle. Lane went to the locker room after being injured on the return.

After getting one first down, New England punted. Later in the quarter Patriots quarterback Tom Brady was picked off in the end zone, though Seattle was unable to capitalize.

The teams got down to football under the open retractable roof at University of Phoenix Stadium after dealing with distractions far beyond typical Super Bowl over the past two weeks.

The Patriots are being investigated for using under-inflated footballs in their 45-7 win over Indianapolis in the AFC championship game. Meanwhile, star running back Lynch was a daily sideshow for the Seahawks this week because he refused to answer questions from the media.

In the 12th matchup between No. 1 seeds since 1975 and the second in a row, the Seahawks (14-4) are trying to become the first team to win consecutive Super Bowls since the Patriots (14-4) a decade ago. Seattle routed Denver 43-8 last year.

The Patriots have tied Dallas and Pittsburgh for most Super Bowl appearances with eight. They're trying to become the sixth franchise to win at least four. Brady and coach Bill Belichick - the only coach-QB combo to reach six together - led the Patriots to three Super Bowl titles from 2001-04, but lost twice to the New York Giants in 2008 and 2011.

Brady and New England's prolific passing attack are facing a tough challenge against Seattle's "Legion of Boom" secondary. All-Pros Richard Sherman and Earl Thomas were in the starting lineup after both were injured in the NFC championship game against Green Bay. Kam Chancellor, a three-time Pro Bowl safety, also started after hurting his knee in Friday's practice.

Seattle's stingy defense was the first since the 1985-86 Chicago Bears to give up the fewest points per game and fewest yards per game in back-to-back seasons.

After John Legend delivered a stirring rendition of "America The Beautiful," Idina Menzel followed with a rousing performance of the national anthem. A pro-Seahawks crowd booed when Belichick was shown on the video screen during the anthem.

Former Seahawks safety Kenny Easley and former Patriots linebacker Teddy Bruschi served as honorary captains on a perfect day with temperature in the upper 60s after rain fell most of the week.