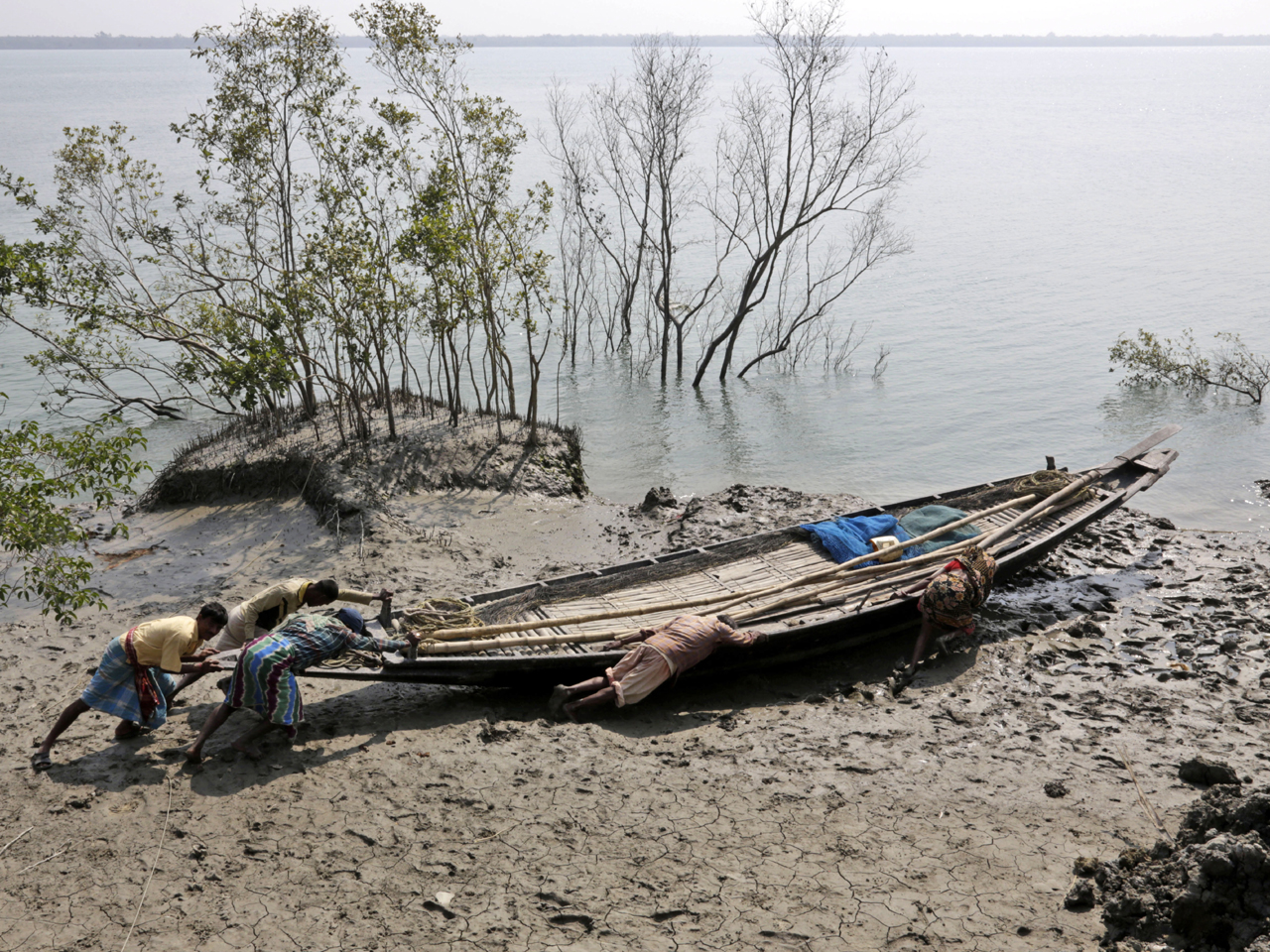 BALI ISLAND, India -- The tiny hut sculpted out of mud at the edge of the sea is barely large enough for Bokul Mondol and his family to lie down. The water has taken everything else from them, and one day it almost certainly will take this, too.

Saltwater long ago engulfed the 5 acres where Mondol once grew rice and tended fish ponds, as his ancestors had on Bali Island for some 200 years. His thatch-covered hut, built on public land, is the fifth he has had to build in the last five years as the sea creeps in.

"Every year we have to move a little further inland," he said.

Seas are rising more than twice as fast as the global average here in the Sundarbans, a low-lying delta region of about 200 islands in the Bay of Bengal where some 13 million impoverished Indians and Bangladeshis live. Tens of thousands like Mondol have already been left homeless, and scientists predict much of the Sundarbans could be underwater in 15 to 25 years.

That could force a singularly massive exodus of millions of "climate refugees," creating enormous challenges for India and Bangladesh that neither country has prepared for.

"This big-time climate migration is looming on the horizon," said Tapas Paul, a New Delhi-based environmental specialist with the World Bank, which is spending hundreds of millions of dollars assessing and preparing a plan for the Sundarbans region.

"If all the people of the Sundarbans have to migrate, this would be the largest-ever migration in the history of mankind," Paul said. The largest to date occurred during the India-Pakistan partition in 1947, when 10 million people or more migrated from one country to the other.

Mondol has no idea where he would go. His family of six is now entirely dependent on neighbors who have not lost their land. Some days they simply don't eat.

"For 10 years I was fighting with the sea, until finally everything was gone," he says, staring blankly at the water lapping at the muddy coast. "We live in constant fear of flooding. If the island is lost, we will all die."

On their own, the Sundarbans' impoverished residents have little chance of moving before catastrophe hits. Facing constant threats from roving tigers and crocodiles, deadly swarms of giant honeybees and poisonous snakes, they struggle to eke out a living by farming, shrimping, fishing and collecting honey from the forests.

Each year, with crude tools and bare hands, they build mud embankments to keep saltwater and wild animals from invading their crops. And each year swollen rivers, monsoon rains and floods wash many of those banks and mud-packed homes back into the sea.

Most struggle on far less than $1 a day. With 5 million people on the Indian side and 8 million in Bangladesh, the Sundarbans population is far greater than any of the small island nations that also face dire threats from rising sea levels.

Losing the 10,000-square-mile region -- an area about the size of Haiti - would also take an environmental toll. The Sundarbans region is teeming with wildlife, including the world's only population of mangrove forest tigers. The freshwater swamps and their tangles of mangrove forests act as a natural buffer protecting India's West Bengal state and Bangladesh from cyclones.

With rising temperatures melting polar ice and expanding oceans, seas have been rising globally at an average rate of about 3 millimeters a year -- a rate scientists say is likely to speed up. The latest projections suggest seas could rise on average up to about 3.3 feet this century.

That would be bad enough for the Sundarbans, where the highest point is around 9.8 feet and the mean elevation is less than a meter above sea level. But sea rise occurs unevenly across the globe because of factors like wind, ocean currents, tectonic shift and variations in the Earth's gravitational pull. The rate of sea rise in the Sundarbans has been measured at twice the global rate or even higher.

In addition, dams and irrigation systems upstream are trapping sediments that could have built up the river deltas that make up the Sundarbans. Other human activities such as deforestation encourage erosion.

A 2013 study by the Zoological Society of London measured the Sundarbans coastline retreating at about 650 feet a year. The Geological Survey of India says at least 81 square miles of coastline on the Indian side has eroded in the last few decades. At least four islands are underwater and dozens of others have been abandoned due to sea rise and erosion.

Many scientists believe the only long-term solution is for most of the Sundarbans population to leave. That may be not only necessary but environmentally beneficial, giving shorn mangrove forests a chance to regrow and capture river sediment in their tangled, saltwater-tolerant roots.

"The chance of a mass migration, to my mind, is actually pretty high. India is not recognizing it for whatever reason," said Anurag Danda, who leads the World Wildlife Fund's climate change adaptation program in the Sundarbans. "It's a crisis waiting to happen. We are just one event away from seeing large-scale displacement and turning a large number of people into destitutes."

West Bengal is no stranger to mass migration. Kolkata, its capital, has been overrun three times by panicked masses fleeing violence or starvation: during a 1943 famine, the 1947 partition and the 1971 war that created today's Bangladesh.

India, however, has no official plan either to help relocate Sundarbans residents or to protect the region from further ecological decline.

Bangladesh is supporting scientists "trying to find out whether it's possible to protect the Sundarbans," said Taibur Rahman, of the Bangladesh government's planning commission. "But we are already experiencing the effects of climate change. The people of the Sundarbans are resilient and have long lived with hardship, but many now are leaving. And we are not yet prepared."

A network of concrete dykes and barriers, like those protecting the Netherlands, offers limited protection to some of the islands in Bangladesh's portion of the Sundarbans. The World Bank is now spending some $200 million to improve those barriers.

Experts worry that politicians will ignore the problem or continue to make traditional promises to build roads, schools and hospital clinics. This could entice more people to the region just when everyone should be moving out.

"We have 15 years ... that's the rough time frame I give for sea level rise to become very difficult and population pressure to become almost unmanageable," said Jayanta Bandopadhyay, an engineer and science professor at Jawaharlal Nehru University in New Delhi who has studied the region for years.

Bandopadhyay and other experts say India and Bangladesh should be creating jobs, offering skills training, freeing lands and making urbanization attractive so people will feel empowered to leave.

Even if India musters that kind of political will, planning and funds, persuading people to move will not be easy.

Most families have been living here since the early 1800s, when the British East India Company -- which then governed India, Pakistan and Bangladesh for the British Empire -- removed huge mangrove forests to allow people to live on and profit from the fertile agricultural land.

Even those who are aware of the threat of rising seas don't want to leave.

"You cannot fight with water," said Sorojit Majhi, a 36-year-old father of four young girls living in a hut crouched behind a crumbling mud embankment. Majhi's ancestral land has also been swallowed by the sea. He admits he's sometimes angry, other times depressed.

"We are scared, but where can we go?" he said. "We cannot fly away like a bird."