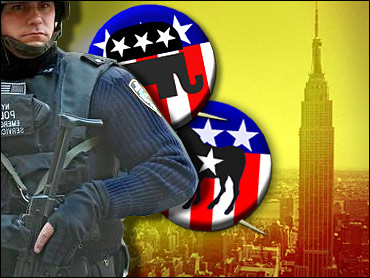 Homeland Security director Tom Ridge said Thursday the U.S. continues to see intelligence that al Qaeda is "moving forward with its plans to conduct an attack in the U.S. in an effort to disrupt our democratic process."

Ridge's warning came more than month after Attorney General John Ashcroft warned that al Qaeda planned an attack sometime this summer. While officials remain worried, the amount of chatter has not increased in recent weeks.

There are some worries that upcoming political conventions in Boston and New York could be terror targets. But there is no hard evidence that terrorists are plotting against the conventions and no specific credible information detailing any possible U.S. attack, reports Orr.

But security analysts suspect al Qaeda's leaders want to build on the successful attack launched in March when a series of train bombings in Madrid seemed to alter the outcome of Spain's elections, reports Orr.

"We have credible information that al Qaeda wishes to accomplish much the same terrorist act within the United States in the next several months," said FBI Director Robert Meuller.

"We lack precise knowledge of the time, place or method of that attack," Ridge said. He did not announce any change in the nation's terrorist alert level, currently at yellow or "elevated."

Ridge's remarks consisted mainly of an update on security efforts. He said he had briefed all 100 Senators earlier Thursday and talked to state homeland security directors Wednesday night.

"We have permanent protections in place today that did not exist a year ago," Ridge said. These included "full nationwide connectivity" to a Homeland Security information center.

The Olympics in August in Athens, Greece, is also a possible target.

In April, a working group made up of representatives from agencies that touch on law enforcement, homeland security and intelligence was established to deal with a series of events through the election that may be attractive targets for terrorists, including the presidential nominating conventions.

Senior administration officials and counterterrorism experts view the coming months as a time to increase vigilance out of concern that Islamic militants may try to replicate the political success they had in Spain with coordinated pre-election train bombings.

Nearly 200 died in the March attack, and the prime minister's ruling Popular Party lost to a rival who promised a pullout of Spanish troops from Iraq.

Senate Majority Leader Bill Frist told reporters that Americans should not expect a major announcement on homeland security any time soon, indicating that the nation's threat level could remain at its "elevated" level.

"There's, obviously, no reason for panic, or paralysis," Frist said after a briefing for senators on intelligence matters. "The country is at some increased risk between now and the time of the presidential election. It's important for people to be aware of that."

"What is clear is that law enforcement has generally been notified. … There are enhanced activities on behalf of law enforcement around the country to engage in deterrence and prevention," he said.

The FBI and Homeland Security Department also are concerned about so-called soft targets such as shopping malls anywhere in the United States that offer a far less protected environment than a political convention hall.

Last month, a grand jury charged that Nuradin Abdi, a 32-year-old Somali native, conspired with admitted al Qaeda member Iyman Faris and others to detonate a bomb at an unidentified shopping mall in Ohio.

FBI Director Robert Mueller told reporters last week in Seattle that local, state and federal officials must cooperate to prevent a new terrorist attack. The lack of such cooperation, from the federal government on down, has been cited by congressional and independent investigators as a key reason the Sept. 11, 2001 plot was not detected.

"We try to use our imagination to determine where the next threat might come from," Mueller said after a visit to the FBI's Seattle field office.