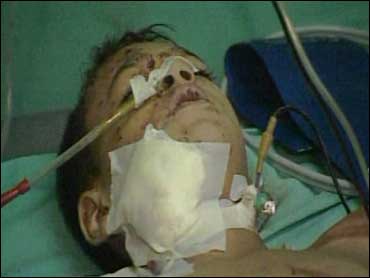 A suicide car bomb exploded next to U.S. troops handing out candy and toys, killing 18 children and teenagers Wednesday. Parents heard the shattering explosion and raced out to the discover the worst — children's mangled, bloodied bodies strewn on the street.

Up to 27 people were killed by the blast in the Shiite Muslim neighborhood, including an American soldier. At least 70 people were injured, a newborn and three U.S. soldiers among them.

Children's slippers lay piled near the blast crater not far from a crumbled child's bicycle as blood pooled in the street.

Twelve of the dead were 13 or younger and six were between 14 and 17, said police Lt. Mohammed Jassim Jabr. Among the wounded was 4-day-old Miriam Jabber, cut slightly by flying glass and debris.

"There were some American troops blocking the highway when a U.S. Humvee came near a gathering of children," said Karim Shukir, 42. The troops began handing out candy and smiley-face key chains.

"Suddenly, a speeding car bomb...struck both the Humvee and the children," Shukir said.

An elderly woman dressed in black beat her chest in front of her house. Others meandered about in the broiling heat, seeming dazed.

In Washington, White House press secretary Scott McClellan strongly condemned the bombing, saying it showed insurgents "have no regard for innocent, human life whether it's men, women or children."

At least 983 people have been killed by car bombers or suicide bombers on foot since the new government was announced on April 28, according to an Associated Press count. At least 2,633 have been wounded in those attacks.

In September 2004, 35 Iraqi children were killed as bombs exploded while American troops handed out candy at a government-sponsored celebration to inaugurate a Baghdad sewage plant. It marked the largest death toll of children in an insurgent attack since the Iraq conflict began.

Later Wednesday, about 200 people turned out for the funeral of five victims, in keeping with Muslim tradition to bury the dead quickly. The crowd shouted "Allahu akbar!" — "God is great — and some fired weapons in the air.

The bomber used a brown Toyota Land Cruiser with a license plate from the southern city of Basra, police said.

It was the second major suicide bombing in Baghdad this week. A suicide bomber killed 25 people Sunday at an army recruiting center.

In a separate Baghdad attack Wednesday, a roadside bomb exploded near an American patrol, killing a 7-year-old child and seriously wounding a woman, police said.

However, U.S. and Iraqi authorities acknowledge eliminating such attacks entirely is all but impossible.

U.S. officials have urged the Shiites in government to reach out to the Sunnis, believing only a political strategy can end the insurgency.

But a negotiated solution has proved difficult as mainstream Sunni groups complain of brutality by Shiite-dominated security forces. Sunni Arabs are believed to comprise about 20 percent of the country's 27 million people.

The bodies were found later in the day in a Shiite neighborhood, said an association official, Sheik Hassan Sabri Salman. The government's Sunni Endowments, which cares for Sunni mosques, also reported the deaths.

Sunni groups also accused security forces of allowing at least nine Sunnis detained last weekend to die after locking them for hours in a van without ventilation as temperatures soared to 115 degrees.

The Iraqi Interior Ministry said both allegations are being investigated, and if true, those responsible will be punished.