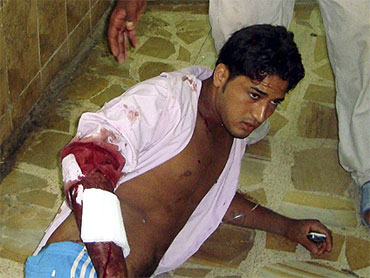 A suicide bomber blew himself up Tuesday among hundreds of army recruits who had gathered near a military headquarters in an attack officials said killed 60 and wounded 125, one of the bloodiest bombings in months in the Iraqi capital.

The massive strike just outside a major division headquarters and recruitment center is an embarrassment to Iraqi security forces and casts doubts on their ability to protect themselves and the nation just two weeks before all but 50,000 U.S. troops head home.

Iraqi military spokesman Maj. Gen. Qassim al-Moussawi blamed al Qaeda in Iraq for enlisting the bomber, whose upper body he said was found at the scene of the blast.

Yasir Ali, who had been waiting outside the military headquarters since 4 a.m. with about 1,000 other hopeful recruits, said he saw the bomber, describing him as a blond young man. Ali said the bomber was sitting quietly among the recruits, then walked up to an officer collecting I.D. cards and blew himself up.

"Severed hands and legs were falling over me," said Ali said, adding he was about 54 feet away from the bomber. "I was soaked with blood from the body parts and wounded and dead people falling over and beside me."

Insurgents have threatened to step up attacks ahead of the U.S. troop departure and violence has increased in recent weeks. Iraqi army, police and other security forces have been targeted, but civilians also have been killed by the hundreds.

Tuesdays' blast took place around 7:30 a.m. outside the former Iraqi Ministry of Defense building that now houses the army's 11th division headquarters. The site receives about 250 new recruits each week as Iraqi security forces try to bolster their ranks to prepare for the U.S. military's looming withdrawal after seven years of war.

Bodies of young men, some still clutching job applications and other documents in their hands, could be seen scattered about at the blast site, which Iraqi soldiers closed off. U.S. helicopters hovered overhead as frantic Iraqis showed up to search for relatives.

At least two recruits who witnessed that attack raised the possibility that a car had also exploded at the scene, which could account for the high death toll. But al-Moussawi blamed the deaths on a single suicide bomber.

"We were sitting there, and somebody began shouting about a parked car," said one of the recruits, Ali Ibrahim, 21, who suffered minor shrapnel wounds in the blast. Ibrahim said he had been waiting to get into the headquarters to secure a job since around 3 a.m.

The recruits had been gathering, many of them since long before dawn, in an open and unprotected area next to Maidan Square in central Baghdad as they waited for hours to be allowed through the main gates of the headquarters in small groups, according to two Iraqi police officials who spoke on condition of anonymity. At least three soldiers were among the dead and eight among the wounded, the police officials said.

Officials at four Baghdad hospitals confirmed the casualties. All spoke on condition of anonymity because they were not authorized to talk to the media.

Al-Moussawi, the military spokesman, told The Associated Press that the blast was caused by a single suicide bomber who detonated his explosives vest among the packed crowd. He put the casualty count at 39 killed and 57 wounded. Varying casualty counts are common in the chaotic aftermath of attacks.

As many as 1,000 army recruits were gathered at the division headquarters, he added, because Tuesday was to be the last day for soldiers to sign up.

"We couldn't get another place for the recruits," al-Moussawi said. "It was difficult to control the area because it's an open area and because of the large number of recruits."

Iraqi security forces have been trying to boost their numbers as the U.S. military begins to leave the country. All but 50,000 U.S. troops will go home by the end of August, with the rest to follow by the end of 2011 under a security agreement between Baghdad and Washington.

This summer in particular has seen a spike in violence in Iraq. Data from the Iraqi defense, interior and ministry officials show that July marked the bloodiest month since May 2008, with more than 500 killed, although tallies compiled by The Associated Press and the U.S. military were lower.

In a similar attack last month, a suicide bomber ripped through a line of anti-al Qaeda Sunni fighters waiting to collect their paychecks near an Iraqi military base, killing 45 people in the mostly Sunni district of Radwaniya southwest of Baghdad.

August, which saw the start of the Muslim holy month of Ramadan, has also been deadly. Two bombs that set off a power generator and ignited a fuel tank on Aug. 7. killed 43 people in a downtown market in Basra, Iraq's second-largest city.