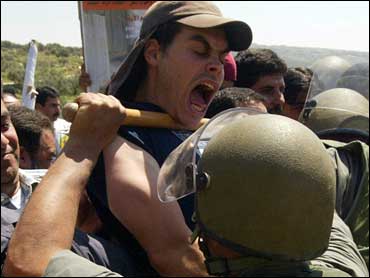 A Palestinian suicide bomber in the West Bank killed three Israelis, just days after the new Hamas Palestinian government took office and Israel elected a premier who pledges to pull out of much of the West Bank.

A huge blast incinerated a car at the entrance to the Jewish settlement of Kedoumim in the late evening hours on Thursday, sending plumes of flame and smoke into the air. The car burned for more than an hour before rescue workers could approach. They found four bodies inside.

Army Radio said police suspect three Israelis, two women and a man, gave a ride to a Palestinian in their car, and the Palestinian blew himself up, killing all four. The report said the Palestinian was dressed as an ultra-Orthodox Jew.

The Israeli rescue service said there were several bodies in the car, which was destroyed in the blast. A rescue service official said medics could not approach the car because it was still on fire nearly an hour after the blast.

The Israeli military said the vehicle had Israeli license plates, and there were at least three bodies in the car. They were burned so badly that identification was difficult, the military said.

Rafaela Segal, who lives at the settlement, said she heard the blast from her house, from where she can see the gas station. "I saw thick smoke rising from the gas station and at first I thought the gas station was on fire," she said. "Now all the roads are closed, except for the emergency vehicles. The smoke has reached my windows," she told Israel Radio more than an hour after the blast. "Security forces are searching the area."

The Al-Aqsa Martyrs' Brigades, a violent offshoot of Fatah, the movement of Palestinian President Mahmoud Abbas, claimed responsibility. It was the first such attack by Fatah since a cease-fire was declared in February 2005, and it came a day after Abbas swore in the new Palestinian government, dominated by Hamas.

There was no immediate comment from the Palestinian leadership, but Israel was quick to denounce the bombing.

David Baker, an official in the Israeli Prime Minister's office, said the attack "took place while the Palestinians refused to lift a finger to prevent terror attacks against Israelis, and we saw the results tonight."

Just two hours before the bombing, the Israel Election Commission released the official results from Tuesday's election, giving an extra seat to acting Prime Minister Ehud Olmert's Kadima Party. Kadima finished with 29 seats of the 120 in the parliament. The hawkish Likud also picked up a seat, giving it 12. The changes were based on counts of votes from soldiers and others not included in the original tally.

Olmert has pledged to pull out of much of the West Bank and move tens of thousands of Jewish settlers from outlying areas in the West Bank to main settlement blocs. He has said he prefers to settle the conflict with the Palestinians through negotiations, but it not, he would take unilateral action to draw Israel's borders.

Olmert has also pledged to take stiff action to halt Palestinian violence. After the bombing, Israeli soldiers blocked roads in the area of the settlement, and Israeli media reported contact with Palestinian security agencies was cut off.

Early Friday, an Israeli warplane fired a missile at an empty Hamas training camp in northern Gaza, breaking a water main, after a day of Israeli artillery barrages, airstrikes and navy cannon fire at the area, where Palestinian militants have been launching rockets at Israel. No casualties were reported on either side.

Olmert has said Israel will not talk to or deal with a Hamas government unless Hamas first recognizes Israel, accepts interim peace accords and renounces violence. Hamas has rejected the demands, and Said Siyam, now the Palestinian interior minister in charge of some of the security forces, has said he would not order the arrest of militants who attack Israel.

The new Palestinian ministers moved into their offices on Thursday and were immediately confronted with a burgeoning financial crisis, as Western donors threatened to cut off vital aid. The U.S., EU and Israel label Hamas a terror group and ban contact with its officials.

Up to now the Palestinian Authority has received a large part of its approximately $1.9 billion annual budget from overseas sources, and it may run into immediate difficulties next week when March salaries are to be paid for some 140,000 government employees.

"We were hoping that some countries would respect the rules of the democratic game and that they would have had different positions and not act this way," he said.

The Quartet of Mideast mediators, the U.S., EU, Russia and the United Nations, warned the Hamas-led government Thursday to recognize Israel and seek peace talks if it wants to be guaranteed continued aid.

"The Quartet concurred that there inevitably will be an effect on direct assistance to that government and its ministries" if those conditions are not met, the mediators said in a statement.

Israel has already stopped transferring tens of millions of dollars a month in taxes it collects on behalf of the Palestinian Authority.