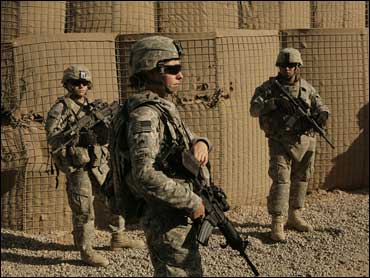 Iraqi guards opened fire on a female suicide bomber on Sunday and triggered her explosives belt before she reached their headquarters, foiling the latest of more than 20 suicide missions by women this year, military officials said.

The bomber was targeting the headquarters of an awakening council - Sunni volunteers who have turned against insurgents - about 60 miles northeast of Baghdad. One of the guards was wounded in the blast, the Iraqi military said.

The number of female suicide attackers has risen from eight in 2007 to more than 20 so far this year, according to U.S. military figures. Including Sunday's attack, at least nine have occurred in Diyala province, a former al Qaeda stronghold where the extremist group is trying to regroup after setbacks last year.

A female suicide bomber struck outside a government complex a week ago in Baqouba, the capital of Diyala province, killing at least 15 people and wounding more than 40, according to U.S. and Iraqi officials.

The attacks are part of an uptick in violence against Iraqi security forces and local administrations.

In other violence, gunmen killed the head of Basra's intelligence department Saturday in a drive-by shooting in eastern Baghdad, local police said, speaking on condition of anonymity because they were not authorized to talk to the media.

Brig. Gen. Jabar Musaid, who played a leading role in the recent government crackdown against Shiite militias in Basra, was visiting relatives in a neighborhood controlled by militiamen loyal to radical Shiite cleric Muqtada al-Sadr.

Asked about the uptick in violence, U.S. Ambassador Ryan Crocker said that Iraqi militants remain "resilient and determined" despite an overall improvement in the security situation.

"They have a capacity to hit back and that's what we're seeing, both from al Qaeda and its allies and from extremist Shia militias," Crocker told CNN on Sunday.

Iraqi Prime Minister Nouri al-Maliki has been stepping up pressure on extremists in recent months, launching operations against Sunni militants in Mosul and Shiite militiamen in Baghdad, Basra and Amarah. Those operations are aimed at restoring government control to strategic areas of the country where armed groups have held sway for years.

But the ongoing crackdown backfired when a relative of the prime minister was killed early Friday in a raid on Hindiyah, about 12 miles east of Karbala, local officials said.

Ali Abdul-Hussein, said to be a cousin of al-Maliki, was shot dead in a raid conducted by 60 U.S. soldiers supported by four helicopters and a fighter jet, provincial police chief, Raed Shakir, said.

Officials close to the prime minister said the killing enraged al-Maliki, who has been locked in negotiations in recent months over a long-term security agreement with the United States.

Al-Maliki demanded an explanation from the Americans, who promised an investigation into the incident, said the officials Sunday, speaking on condition of anonymity because they were not authorized to talk to the media.

Asked to comment on the death, a U.S. military spokesman said troops were going after Shiite extremist groups in the Karbala area when a security guard left a building "while brandishing an AK-47 rifle" held against his shoulder "as if to fire."

"Perceiving hostile intent and acting in self defense, coalition forces shot and killed the armed man," Lt. David Russell wrote in an e-mail. "It was later determined the man killed was a local security guard."

Russell made no mention of any relationship to al-Maliki but added that "coalition forces deeply regret the loss of life" and have begun an investigation.

Meanwhile, Karbala Gov. Aqil al-Khuzaie said in a statement Saturday that the raid was a violation of an agreement signed with the U.S. last year that transferred Karbala to the control of Iraqi security forces.

"We are shocked to hear about the operation that has led to the killing of an innocent person," said al-Khuzaie.