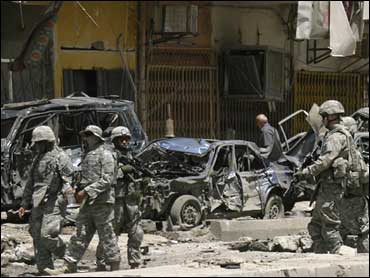 In Baghdad, a car bomb aimed at a U.S. patrol in Baghdad on Thursday killed an American soldier and least nine Iraqi civilians and wounded 26, police and military said.

The first attack on the wedding convoy in the town of Balad Ruz was carried out by a female suicide bomber, said Army Maj. Gen. Abdul-Karim al-Rubaie, an official with the Diyala provincial operations center that oversees the town.

About 10 minutes later, a man detonated his explosives as rescue workers were trying to help the victims of the first attack, Al-Rubaie said.

There was no immediate claim of responsibility but the attack bore the hallmarks of al Qaeda in Iraq.

The Baghdad explosion occurred about 9:15 a.m. in a crowded commercial area in the eastern part of the city, police officials said. The U.S. military said a soldier died of wounds sustained in the blast.

Three women and a child were among the nine Iraqis killed in the attack, police said.

The soldier's death raises to at least 4,064 members of the U.S. military who have died since the Iraq war started in March 2003, according to an Associated Press count.

Health officials also said clashes in Baghdad's Shiite militia stronghold of Sadr City killed eight people, including two women and a child, and wounded 22 others, including women and children.

The Iraqi officials spoke on condition of anonymity because they weren't authorized to release the information.

Prime Minister Nouri al-Maliki has accused fighters of the anti-American cleric Muqtada al-Sadr's Mahdi Army of using residents as human shields during close combat in the teeming slum, which has become the epicenter of fighting since a government crackdown triggered clashes in late March.

The militants have no choice but to lay down their weapons, al-Maliki said Thursday. He called on Shiite clerics and lawmakers to try to prevent the militants from using innocent people as cover.

In fighting Thursday, U.S. forces killed a senior member of what they say Iranian-backed forces in Sadr City in an airstrike, the military said.

In a raid, U.S.-backed Iraqi forces seized a large stockpile of ammunition including 10 roadside bombs at a mosque in Abu Dshir, the military said. Iraqi police said 45 mortar rounds and 42 rockets were also seized in the raid in the Shiite-dominated neighborhood.

In fighting late Wednesday and early Thursday in Sadr City, U.S. soldiers killed 18 militants in a series of clashes. Several of the militants had fired on the military or were preparing to. Other militants were killed while planting a roadside bomb. The fighting was reported in statements issued Thursday by the military.

Lt. Col. Steve Stover, a military spokesman for American troops in Baghdad, blamed the militants for putting civilians at risk by staging attacks from populated areas.

"We will exercise all precaution when returning fire; however, we will defend ourselves against violent aggression," Stover said.

Stover blamed what he called Iranian-backed groups of launching attacks on U.S. troops, adding that U.S. troops were working hard to specifically target the enemy and avoid civilian casualties.

The Iraqi government, meanwhile, sent a delegation of five Shiite politicians to Iran carrying documents and other material they claim indicates that Tehran is supplying weapons and training fighters who are locked in a violent standoff with U.S. and Iraqi troops, a government official said. The official spoke on condition because he wasn't authorized to release the information.

The visit comes as U.S. military has stepped up its allegations that Iran is continuing to train and arm Shiite militias despite Tehran's insistence that it is not fueling violence in Iraq but trying to promote stability in the neighboring country.

The fighting in Sadr City - a base for the powerful Mahdi Army militia - intensified after al-Sadr last week threatened to unleash an "open war" against U.S.-led forces who try to exert control, with the help of Iraqi forces, over an area containing nearly half of the Baghdad's population.

The U.S. military reported early Thursday that a soldier had been killed by an explosion Wednesday near a patrol in Ninevah province.

Around Iraq, at least 1,080 Iraqi civilians and security forces were killed nationwide last month, or an average of 36 a day, according to an AP tally. That's down from March's total of 1,269, or an average of 41 per day.

Officials reported at least 479 deaths in Sadr City but they could not break down the number of militants, Iraqi Security forces and civilians.