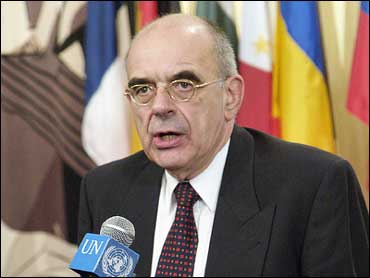 The Sudanese government Sunday ordered the chief U.N. envoy to leave the country within three days after he wrote that the Sudanese army had suffered serious losses in fighting with rebels in northern Darfur.

The official Sudan News Agency said the order was issued against the envoy, Jan Pronk of the Netherlands, because he had demonstrated "enmity to the Sudanese government and the armed forces" and was involved in unspecified activities "that are incompatible with his mission."

The Foreign Ministry informed the U.N. office in Khartoum in writing that Pronk's mission "has come to an end" and he "must leave Sudanese territory within 72 hours starting from midday Sunday," the official agency said.

Sudan's government has been at odds with Pronk over Western efforts to get Sudan to allow a U.N. force of 20,000 troops to take over peacekeeping in Darfur — a move President Omar al-Bashir has flatly rejected as a bid to restore colonial rule.

Tension between the government and Pronk escalated after he wrote in his personal Web blog this month (www.janpronk.nl) that Sudanese army losses in recent fighting in northern Darfur "seem to have been very high."

"Reports speak about hundreds of casualties in each of the two battles, many wounded soldiers and many taken as prisoner," he said, adding that morale was low among Sudanese troops in northern Darfur and "some generals have been sacked; soldiers have refused fighting."

On Thursday, the Sudanese armed forces said those remarks amounted to "psychological war against the Sudanese army" and declared that Pronk was "persona non-grata." One day later the military demanded an official apology.

According to the official news agency, the government said it was "committed to cooperate" with the U.N. and would work with Pronk's replacement "in accordance with signed treaties with the U.N. and the current principles of international law."

There was no immediate comment from the United Nations, and efforts to reach the U.N. office in Khartoum by telephone were unsuccessful.

Marie Heuze, chief spokeswoman for the U.N. in Geneva, said she could not comment on the order but noted that Pronk's comments were on a personal blog and "were not necessarily shared by the United Nations."

The violence has risen dramatically in recent weeks in Darfur, where more than 200,000 people have been killed and 2.5 million displaced in three years of fighting.

An underfunded and overwhelmed African Union force of 7,000 soldiers is struggling to keep order in Darfur. European Union leaders called on Sudan on Friday to accept the U.N. Security Council resolution that would send U.N. peacekeepers instead.

A peace deal this year was signed by the Sudanese government and the main rebel group.

The Sudanese government is accused of attacking civilians with its own army and backing militias known as the janjaweed believed to be responsible for some of the worst atrocities.