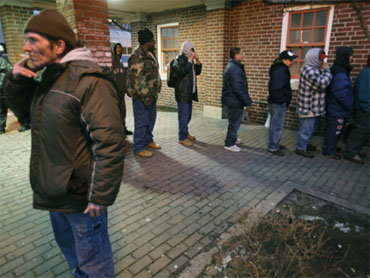 Homelessness in rural and suburban America is straining shelters this winter as the economy founders and joblessness hovers near double digits - a "perfect storm of foreclosures, unemployment and a shortage of affordable housing," in one official's eyes.

"We are seeing many families that never before sought government help," said Greg Blass, commissioner of Social Services in Suffolk County on eastern Long Island.

"We see a spiral in food stamps, heating assistance applications; Medicaid is skyrocketing," Blass added. "It is truly reaching a stage of being alarming."

The federal government is again counting the nation's homeless and, by many accounts, the suburban numbers continue to rise, especially for families, women, children, Latinos and men seeking help for the first time. Some have to be turned away.

"Yes, there has definitely been an increased number of turnaways this year," said Jennifer Hill, executive director of the Alliance to End Homelessness in suburban Cook County, Illinois. "We're seeing increases in shelter use along the lines of 30 percent or more."

The U.S. Department of Housing and Urban Development's annual survey last year found homelessness remained steady at about 1.6 million people, but the percentage of rural or suburban homelessness rose from 23 percent to 32 percent. The 2009 HUD report, which reflected the 12 months ending Sept. 30, 2008, also found the number of sheltered homeless families grew from about 473,000 to 517,000.

Greta Guarton, executive director of the Nassau-Suffolk Coalition for the Homeless on Long Island, led a recent group of about 40 volunteers to scour vacant lots and industrial parks for this year's HUD survey; results are expected in several months.

"One of the things that we've noticed is a lot more unsheltered, mostly men who claim this is the first time they've been homeless, who indicate that it's due to a loss of wages or loss of job, because of the economy," Guarton said.

Stephanie Hawkins, who lost her manager's job when a shelter for drug addicts and alcoholics closed last summer, is now among about a dozen or more "guests" living in a different kind of Long Island shelter - this one for women who have nowhere else to go.

"I lost my job and I lost my home," said Hawkins, 44, fighting tears. Her issues are compounded by a cancer diagnosis that requires chemotherapy. "I lived where I worked."

Nery Nij came to the United States from Guatemala six years ago. For much of that time he was a landscaper, manicuring the lawns of million-dollar seaside Hamptons estates. Most nights this winter, Nij joins dozens of day laborers and others who are provided shelter in church basements and auditoriums across eastern Long Island.

Naiquan Pritchett says he was devastated when he lost his job in construction about four months ago. His bills quickly mounted and he now lives in a Long Island shelter for men. "I had been doing construction for nine years," Pritchett said.

The crunch is seen in suburbs around the country.

Northeast of Atlanta, foreclosures rose 77 percent from 2008 to 2009, said Suzy Bus of the Gwinnett County Coalition for Health and Human Services. About 60 percent of the county's homeless are children 9 and younger, she said.

"People equate homeless to a guy under a bridge, but it's a lot more complex than that, and it permeates much further into our society than a lot of people realize," Bus said.

When families lose their homes and relocate, their children's schooling can be disrupted. Some move into extended-stay hotels that cost about $175 a week, but that sometimes exposes them to criminal activity like prostitution and drug deals, Bus said.

In Coatesville, Pa., a former steel town of about 11,000 outside Philadelphia, the City Gate Mission added five beds to its shelter in November 2008. But director Jim Davis said that even with 21 beds, the shelter has still had to turn people away on many nights.

"There was a period of time recently where maybe as many as five people a day they would say no to by phone," Davis said.

Even in the Hamptons, a summer playground for millionaires, demand is increasing for homeless services, according to Denis Yuen, director of Maureen's Haven, a consortium of 25 churches on eastern Long Island. Churches alternate hosting the homeless on different nights, offering cots or inflatable beds and hot meals.

"This year we saw an influx of Latinos, some of whom had not worked in four or five months," Yuen said. "They are living hand-to-mouth, depending on soup kitchens. Before this, they at least had a little work."

Nadia Marin-Molina, executive director of the Workplace Project, a Latino advocacy group, said undocumented workers from Mexico or Central America have limited access to government-run shelters and depend on groups like Maureen's Haven.

She said more must be done to determine how many homeless don't benefit from either government or community aid. Part of the problem is that some undocumented live in fear of deportation and therefore avoid any interaction with authorities.

"There isn't an understanding of how many people are living in the woods," she said.

"Most of the problem I noticed with homeless that come stay with us is their family don't want to be bothered with them," Haynes said.

Tom Sweeney worked in private security for 25 years before the company folded. Now he stays at Peace Valley Haven.

"I didn't have any money saved," said Sweeney, who admitted battling drug and alcohol abuse in the past. "You gotta hustle to get something to eat, panhandle, do whatever you can. If you can find a warm bed, take it, because being on the street ain't life as it's supposed to be."