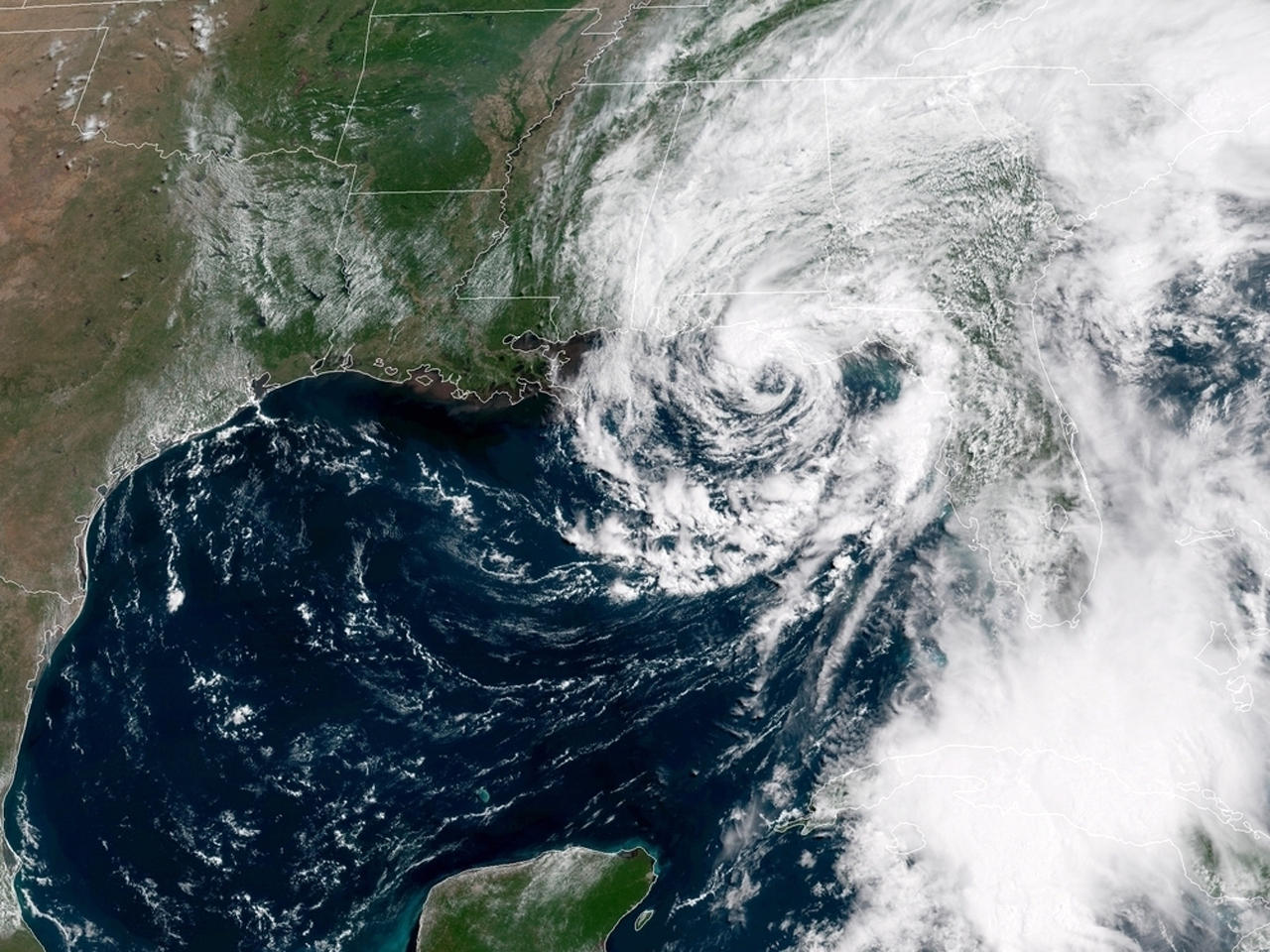 As of 10 p.m. ET, Alberto had maximum sustained winds of 35 mph and its core was located in southern Alabama, near Opp. The storm is expected to move through Alabama Monday into Tuesday. It is then expected to move over the Tennessee Valley on Tuesday and into the Ohio Valley and Great Lakes region on Wednesday and Thursday.

Alberto is expected to produce 2 to 6 inches of rain from Alabama to the western Great Lakes and from northern Florida to the mid-Atlantic coast through Wednesday.

Rough conditions were whipping up big waves off the eastern and northern Gulf Coast, and authorities warned swimmers to stay out of the surf because of life-threatening swells and rip currents.

"Given the short period of time before Alberto makes landfall, its overall ragged appearance, and proximity to dry air, little change in strength is expected before the subtropical storm reaches the coast," said John Cangialosi, a hurricane specialist at the hurricane center.

As Alberto's center heads inland -- deprived of the warm waters that fuel tropical weather systems -- the storm was expected to steadily weaken. A subtropical storm like Alberto has a less defined and cooler center than a tropical storm, and its strongest winds are found farther from its center. A tropical storm warning is in effect for a stretch of coastline between Aucilla River in Florida's Big Bend and the Alabama-Florida border.

Lifeguards posted red flags along the white sands of Pensacola Beach, where swimming and wading were banned.

Meanwhile, the storm forced some Memorial Day tributes to be cancelled across Florida's Panhandle. Safety was the priority, but the decision was still a "heartbreaker," said Tom Rice, a 29-year-old Army veteran who leads the organizations that planned a ceremony Monday at Beal Memorial Cemetery in Fort Walton Beach.

Some stragglers still made their way through the rain to pay tribute at the cemetery's Veterans Tribute Tower, however. Rice said American flags had been placed Saturday on the graves of all 1,700 veterans buried in the cemetery.

"We got the flags out," Rice told the Northwest Florida Daily News as wind whipped a massive U.S. flag flying at half-staff. "That's what's important."

Jason Powell said he was seeking to keep his children entertained until Alberto blows past his Panhandle vacation spot.

"So far we've seen a lot of wind and the ocean is really high, covering up the entire beach," Powell said. "We're not letting it ruin our vacation ... we're going to watch some movies inside and a little TV, and hopefully maybe even get into the pool" despite the rain.

Janet Rhumes said her group of friends from Kansas had been planning their Memorial Day weekend on Navarre Beach since October. They stocked up on groceries and planned to play card games. No storm could deter them.

"We've never seen one before and we're here celebrating a friend's 20th birthday," Rhumes told the Daily News. "So how often can you say you rode a storm out?"

The mayor of Orange Beach, on Alabama's Gulf Coast, said Alberto brought rain and aggravation — and dashed hopes for record Memorial Day crowds. Instead, red flags flew on Alabama beaches and officers patrolled, making sure no one entered the water.

Elsewhere, Florida's Division of Emergency Management said, about 2,600 customers were without power in northwestern Florida on Monday morning.

Scarlett Rustemeyer, a barista at the Fosko Coffee Barre in Pensacola Beach, said she always frets about power outages whenever storms bluster through.

"My boyfriend and I usually try to go to the store and stock up on lots of bottled water, and get like canned goods and things that won't go bad if our power goes out," she said.

Alberto, the first named storm of 2018, got an early jump on the Atlantic hurricane season.

The National Oceanic and Atmospheric Administration released the annual hurricane season forecast Thursday in which they call for 10 to 16 named storms, with five to nine hurricanes. One to four hurricanes could be "major" with sustained winds of at least 111 mph.

If that forecast holds, it would make for a near-normal or above-normal season. An average hurricane season produces 12 named storms, of which six become hurricanes, including three major hurricanes.

What is a tropical storm watch?

A tropical storm watch means that tropical storm conditions are possible for the area and time frame described. At the most recent information available from NOAA, the Cuban province of Pinar del Rio and areas of Mexico from Tulum to Cabo Catoche should monitor Alberto for the next 24 hours.

What is a subtropical storm?