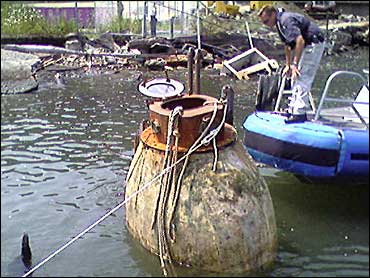 The vessel, with one person inside, and an inflatable boat carrying two people, were spotted near a security zone around the luxury ocean liner docked at the cruise ship terminal in Red Hook, Brooklyn.

It was not clear what the people were doing in the vessels, but police said there was no indication that the incident was related to terrorism.

The brown, egg-shaped wooden vessel, known as a "turtle submarine," is a replica of a submarine used during the American Revolution, said Coast Guard Petty Officer Angelia Rorison. It looks like a diving bell, with a hatch on top, and is about 8 feet long and 4 feet wide. It is propelled
by a pedal-operated paddle.

The Coast Guard issued two citations to Philip Riley, 35, who was inside the vessel, Rorison said.

"Basically, the vessel was not safe to sail. It had no lights, no flares. It was not registered," Rorison said. "Instead of safety violations, this could have turned into a search and rescue."

Watch Live: Biden to call for $100 payments for getting vaccinated

The investigation began after a New York police detective noticed the sub and the raft and summoned the Harbor Unit. Rorison said all three men were taken in for questioning by the NYPD.

"All three males are expected to be charged with a number of violations and both vessels will be secured by the Harbor Unit," the NYPD said.