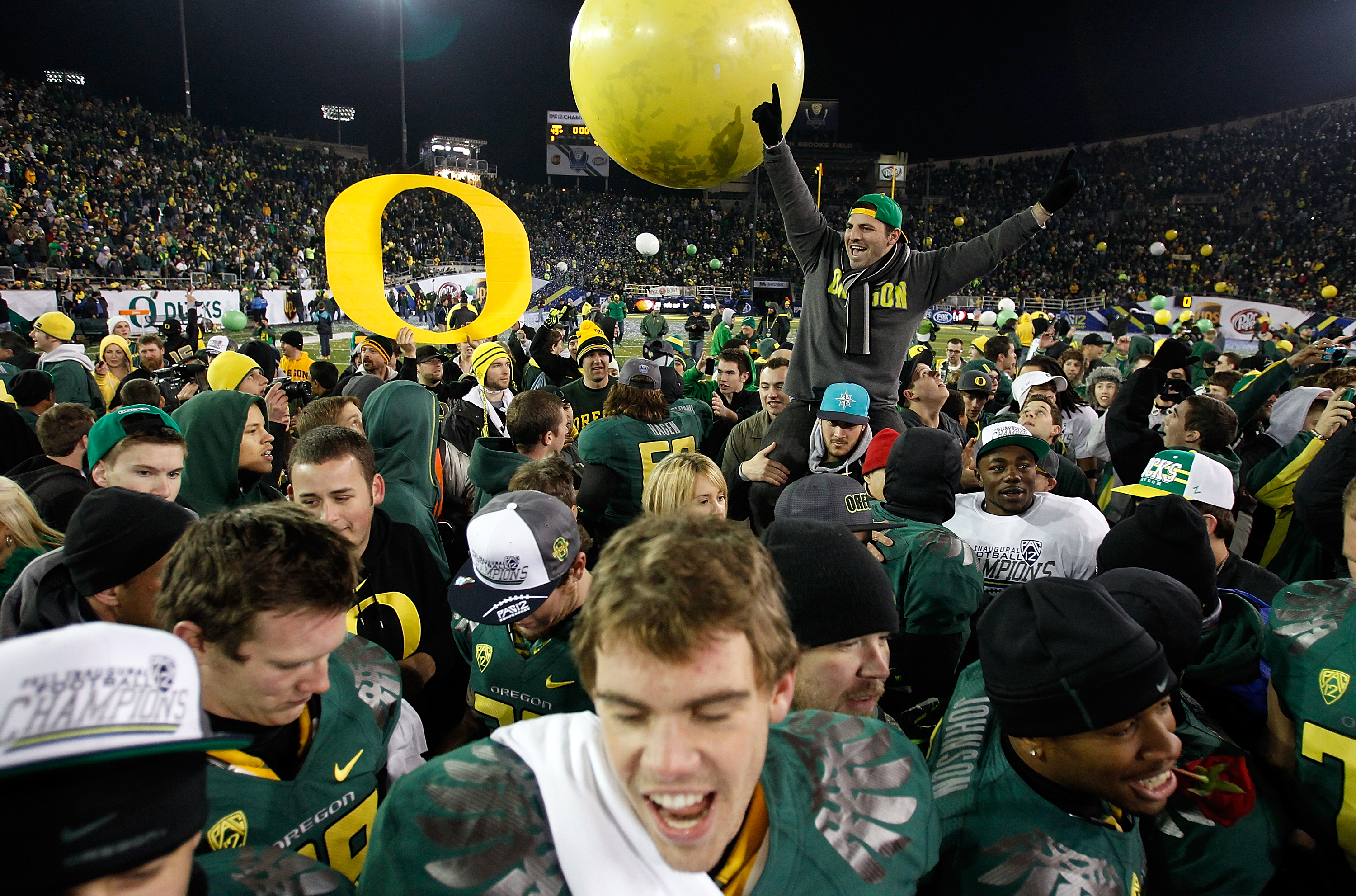 On campus, a successful football team is a cause for celebration.

So much celebration, in fact, that three economists have found a link between a winning season at one big-time football program and lower grades for male students.

In a new paper, the economists at the University of Oregon chart the grade point averages of students there alongside the fortunes of the football team between 1999 and 2007. Their findings could give ammo to critics of big-time college sports.

Their conclusion: When the Ducks were winning, students celebrated more and grades suffered. And that doesn't bode well for upcoming report cards — the Ducks are 11-2 this season, Pac-12 champions for the third straight year, and headed to the Rose Bowl.

Women's grades held up better than men's when the team was doing well — and the drop in men's grades compounded a GPA gender gap that was already present at Oregon, as it is on many campuses.

The bottom line: Three extra wins for the Ducks' football squad in any given year caused a drop in male GPAs that's about as steep as the one you'd expect if male students had scored 27 points lower on their SATs.

Chalk it up as another cost to consider for a successful big-time athletic program, right up there with ballooning coaches' salaries, travel budgets and stadium expansions.

Academically, a school might be better off with a crummy season on the field that makes students want to head to the library to forget.

The study was published this week by the National Bureau of Economic Research. Lindo, Oregon faculty colleague Glen Waddell and graduate student Isaac Swensen examined the GPAs during fall term (football season) of nearly 30,000 students who weren't athletes, over a period when the Ducks' football record ranged from 5-6 to 11-1.

On average, men were earning GPAs of 2.94, compared to 3.12 for women. But the more the team won, the more the gap widened; three extra wins amounted to an approximately 8 percent increase in the difference.

Even though female GPAs held steady in better football seasons, the authors believe their academic performance could still have suffered — they may have just benefited from lower male grades bringing down the grading curve for everyone.

"It's consistent with the culture on campus and the culture at this university where a stronger emphasis is put on athletic success than on academic success," Eckstein said. Though a fan himself, he says the university's financial and building priorities favor sports facilities over academics, and "there's a lack of focus on connecting our athletic success to our academic mission" which trickles down to students.

Asked to comment, the university provided a statement from acting provost Lorraine Davis.

"Academic success has been and remains the top priority at the University of Oregon," she said. "I am proud of the academic strengths of the institution. Our athletic programs enhance experiences for our students, faculty, alumni and the greater community."

The study examines just one university, albeit a fairly representative one with a top-tier football program. But it could provide grist for the increasingly intense argument about the value of college athletics.

Oregon is in fact one of a tiny number of universities where the athletic program reports turning a profit for the university. But even at schools where that's not the case, supporters argue college sports still have intangible benefits such as community spirit and alumni loyalty.

But now, critics can point to real data on a possible intangible cost. The study offers evidence on-field success can come directly at the expense of student success off it.

Especially concerning is the effect on men, who are struggling mightily on college campuses — women ages 24 to 29 are already 29 percent more likely than men to have completed a baccalaureate degree.

Lindo said his interest emerged partly from noticing, upon arrival on Oregon's campus after time at the non-football-power University of California-Davis, just how much time students and others in Eugene spent thinking and talking about football.

He himself has become a fan, though he said he couldn't say if that's affected his own work in the same way it apparently has Oregon's male students.

"A possible interpretation is that men are just susceptible to distractions, and college football at a big-time sports university is one such distraction that can really affect a male's performance," he said.

But extrapolating that a place like Oregon should thus drop college football would be "hasty," he said.

"This is a cost, it's an important cost," he said. "But it has to be weighed against potential benefits."