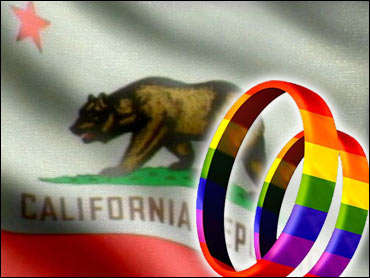 Same-sex weddings could create hundreds of new jobs and pump hundreds of millions of dollars into California's economy, according to a new study released Monday.

Gay couples are projected to spend $684 million on flowers, cakes, hotels, photographers and other wedding services over the next three years - so long as voters don't put a halt to the same-sex marriage spree, according to a study by the Williams Institute at University of California, Los Angeles School of Law.

During the three-year period, the researchers project that about half of the state's more than 100,000 same-sex couples will get married and another 68,000 out-of-state couples will travel to California to exchange vows. The nuptial rush is expected to create some 2,200 jobs.

The study estimates that over the next three years, gay weddings will generate $64 million in additional tax revenue for the state, and another $9 million in marriage-license fees for counties.

"This is clearly a win-win situation," said Lee Badgett, study co-author and research director at the Williams Institute. "It's good for the larger economy, there's a trickle down to state and local governments, and people get to celebrate their relationships."

Badgett said same-sex weddings could help prop up the state's tourism industry, which has been hit by skyrocketing fuel costs, rising airfares and a sagging economy. Picturesque locales and romantic getaways should see more business from gay weddings and honeymoons.

Researchers studied the economic impact of gay marriage in Massachusetts - the only U.S. state that allows gays and lesbians to marry - to develop their projections for California. They also used data from states such as Vermont that allow civil unions or domestic partnerships for same-sex couples.

The California study focused on the next three years because researchers found the number of gay weddings tapered off three years after Massachusetts legalized same-sex marriage in 2004.

But the gay wedding march could be cut short if California voters approve a Nov. 4 ballot initiative that would overturn the court ruling and ban same-sex marriage.