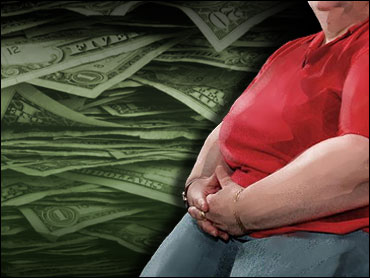 If your company has a salary scale, there may be a reason why they use that word.

A new study reveals that thinner women -- and larger men -- tend to make the most money.

"Early Show" Contributing Correspondent Taryn Winter Brill reported new research from the University of Florida (pdf) finds that, for women, corporate America is just like a catwalk -- the smaller your waist -- the bigger your paycheck. But if you're a man looking to snag that corner office, don't worry about skipping dessert. Thinner men actually make less money.

When we took the findings to an expert, she wasn't surprised.

Debra Shigley, a career expert, said, "I think women are judged by their appearance in the workplace…Women are expected to be thinner and men…the standards are a little more flexible for men."

For more expert opinion, check out what CBS News Medical Correspondent Dr. Jennifer Ashton and "Early Show" Contributor and child and adolescent psychologist Dr. Jennifer Hartstein had to say on the broadcast about what this study means about health and Americans' mentality toward weight.