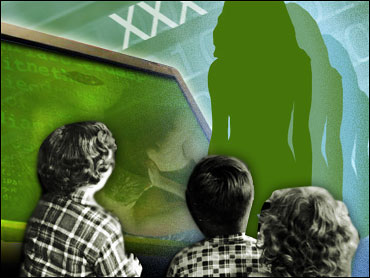 Forty-two percent of Internet users aged 10 to 17 surveyed said they had seen online pornography in a recent 12-month span. Of those, 66 percent said they did not want to view the images and had not sought them out, University of New Hampshire researchers found. Their conclusions appear in February's Pediatrics, due out Monday.

Parts of the study were released last November and found that one in seven had received "unwanted sexual solicitations or approaches in the past year."

"Something could pop up at any time," Morano said. "And if you don't have a pop-up blocker, you could be exposed to these bad pictures."

Online pornography was defined in the study as images of naked people or people having sex.

"It's so common now, who hasn't seen something like that?" said Emily Duhovny, 17.

The Marlboro, N.J., high school senior said X-rated images pop up all the time when she's online. Duhovny said the first time she saw one, it was shocking, but now, "more than anything, it's just annoying."

"It doesn't have to be a negative thing, but that shouldn't be how you learn about sex education," said Duhovny, an editor for Sexetc.org, a teen-written Web site on sexual health issues affiliated with Rutgers University.

"It comes as no surprise that teens are exposed to both wanted and unwanted sexual material online. That's all the more reason for parents to keep in close touch with their kids, keep computers in a central area of the house and – if necessary – use parental control software that blocks inappropriate sites," CBS News technology analyst Larry Magid said.

More than one-third of 16- and 17-year-old boys surveyed said they had intentionally visited X-rated sites in the past year. Among girls the same age, 8 percent had done so.

The results come from a telephone survey of 1,500 Internet users aged 10 to 17, conducted with their parents' consent.

Overall, 36 percent had unwanted exposure to online pornography, including some children who had willingly viewed pornography in other instances. The 2005 number was up from 25 percent in a similar survey conducted in 1999 and 2000.

The latest survey has a margin of error of plus or minus 2.5 percentage points.

Online use that put kids at the highest risk for unwanted exposure to pornography was using file-sharing programs to download images. However, they also stumbled onto X-rated images through other "normal" Internet use, the researchers said, including talking online with friends, visiting chat rooms and playing games.

Filtering and blocking software helped prevent exposure, but was not 100 percent effective, the researchers said.

Better methods are needed "to restrict the use of aggressive and deceptive tactics to market pornography online" without also hampering access to legitimate sites, the researchers said.

University of Chicago psychiatrist Sharon Hirsch said exposure to online pornography could lead kids to become sexually active too soon, or could put them at risk for being victimized by sexual predators if they visit sites that prey on children.

"They're seeing things that they're really not emotionally prepared to see yet, which can cause trauma to them," Hirsch said.

Exposure also could skew their perceptions about what constitutes a healthy sexual relationship, said Janis Wolak, the study's lead author and a researcher at the University of New Hampshire's Crimes Against Children Research Center.

Still, many survey participants said they were not disturbed by what they saw, and Wolak said research is needed to determine how exposure to online pornography affects kids.