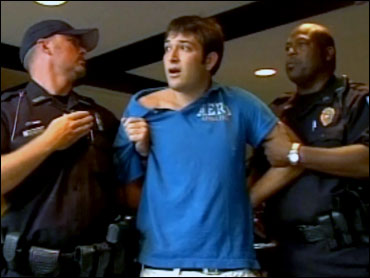 A university student with a history of taping his own practical jokes was Tasered by campus police and arrested after loudly and repeatedly trying to ask U.S. Sen. John Kerry questions during a campus forum.

Andrew Meyer, 21, spent a night in jail before his release from jail Tuesday morning on his own recognizance. He had no comment when he left. His attorney, Robert Griscti, did not return messages seeking comment.

Videos of the Monday night incident, posted on several Web sites and played repeatedly on television news, show University of Florida police officers pulling Meyer away from the microphone after he asks Kerry about impeaching President Bush and whether he and Bush were both members of the secret society Skull and Bones at Yale University.

University spokesman Steve Orlando said Meyer was asked to leave the microphone after his allotted time was up. Meyer can be seen refusing to walk away and getting upset that the microphone was cut off.

As two officers take Meyer by the arms, Kerry, D-Mass., can be heard saying, "That's all right, let me answer his question."

Audience members applaud, and Meyer struggles for several seconds as up to four officers try to remove him from the room. Meyer screams for help and tries to break away from officers with his arms flailing at them, then is forced to the ground and officers order him to stop resisting.

As Kerry tells the audience he will answer the student's "very important question," Meyer yells at the officers to release him, crying out, "Don't Tase me, bro," just before he is shocked by the Taser. He is then led from the room, screaming, "What did I do?"

University President J. Bernard Machen issued a statement Tuesday saying he requested the Florida Department of Law Enforcement to investigate the arrest. Officials said it would determine whether the officers used an appropriate level of force.

Machen called the situation "regretful" in an afternoon news conference and said two officers involved in the incident were placed on administrative leave pending the outcome of the probe.

"We're absolutely committed to having a safe environment for our faculty and our students so that a free exchange of ideas can occur," Machen said.

Kerry said Tuesday he regretted that a healthy discussion was interrupted and that he never had a dialogue end that way in 37 years of public appearances. He also said he hoped neither the student nor police were injured.

"Whatever happened, the police had a reason, had made their decision that there was something they needed to do. Then it's a law enforcement issue, not mine," he told The Associated Press in Washington.

Meyer has his own Web site and it contains several "comedy" videos that he appears in. In one, he stands in a street with a sign that says "Harry Dies" after the latest Harry Potter book was released. In another, he acts like a drunk while trying to pick up a woman in a bar.

The site also has what is called a "disorganized diatribe" attributed to Meyer that criticizes the Iraq war, the news media for not covering the conflict enough and the American public for paying too much attention to celebrity news.