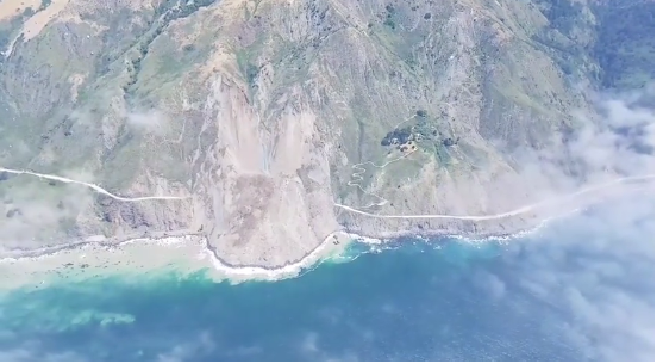 BIG SUR, Calif. -- A massive landslide that went into the Pacific Ocean is the latest natural disaster to hit a California community that relies heavily on an iconic coastal highway and tourism to survive, and it adds to a record $1 billion in highway damage from one of the state's wettest winters in decades.

The weekend slide in Big Sur buried a portion of Highway 1 under a 40-foot layer of rock and dirt and changed the coastline below to include what now looks like a rounded skirt hem, Susana Cruz, a spokeswoman with the California Department of Transportation, said Tuesday.

More than 1 million tons of rock and dirt tumbled down a saturated slope in an area called Mud Creek. The slide is covering up about a one-quarter-of-a-mile stretch of Highway 1, and authorities have no estimate on when it might re-open. The area remains unstable.

"We haven't been able to go up there and assess. It's still moving," Cruz said. "We have geologists and engineers who are going to check it out this week to see how do we pick up the pieces."

It's the largest mudslide she knows of in the state's history, she said. "It's one of a kind," Cruz said.

The Monterey County Sheriff's Office posted a video on Facebook of the slide along Mud Creek, located about eight miles north of the Monterey/San Luis Obispo county line.

One of California's rainiest and snowiest winters on record has broken a five-year drought, but also caused flooding and landslides in much of the state and sped up coastal erosion.

"This type of thing may become more frequent, but Big Sur has its own unique geology," said Dan Carl, a district director for the California Coastal Commission whose area includes Big Sur. "A lot of Big Sur is moving; you just don't see it."

Even before the weekend slide, storms have caused just over $1 billion in highway damage to 424 sites over the fiscal year that ends in June, Mark Dinger, also a spokesman for the state transportation agency, said Tuesday. That compares with $660 million last year, he said.

Big Sur along narrow, windy Highway 1 between San Francisco and Los Angeles has experienced an especially tough winter, state transportation spokesman Colin Jones said. Repeated landslides and floods have taken out bridges and highways, closed campgrounds, and forced some resorts to shut down temporarily or use helicopters to fly in guests and supplies. In February, a massive landslide on Highway 17 in Santa Cruz in northern California led to dangerous conditions and the highway to be partially closed.

Big Sur is one of the state's biggest tourist draws in a normal year, attracting visitors to serene groves of redwoods, beaches and the highway's dramatic oceanside scenery.

The state already had closed the Highway 1 along Mud Creek to repair buckled pavement and remove debris after an earlier slide triggered by one of California's rainiest winters in decades. Authorities removed work crews from the area last week after realizing that saturated soil in that area was increasingly unstable, Jones said.

Last year, a wildfire burned for nearly three months in the Los Padres National Forest and on private land, sparked by an illegal campfire. Thousands of visitors were shut out from signature state parks and the businesses that cater to those tourists.

Kirk Gafill, president of the Big Sur Chamber of Commerce and owner of the historic Nepenthe Restaurant, said the slide may prove a blessing, stabilizing land that Caltrans was working to shore up.

On the other hand, he acknowledges his theory may be wishful thinking.

"There's no question if you live and own a business in Big Sur, you live in a very dramatic landscape and we know historically, whether it's fire or a mudslide or a landslide from one year to the next it's not very predictable," said Gafill, whose restaurant is serving two to three dozen local diners a day rather than the 600 to 1,000 typical for this time of year.

Gafill said repairing this landslide is not as critical for business as replacing Pfeiffer Canyon Bridge, a famous span on Highway 1 that had to be demolished earlier this year after it was badly damaged by slides from heavy rain in January and February. The new span is scheduled to open in September.

Kurt Mayer, who owns Big Sur Tap House, was also taking news of the slide in stride. He said Tuesday he wouldn't trade in his work location for somewhere safer.

"We're all going to make it, I'm pretty sure," he said. "Big Sur can scare some people, and those people usually come and go pretty quickly. And those who can hang, they're still there and they'll continue to be there."