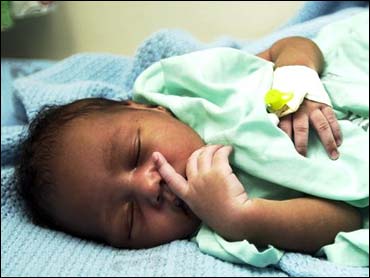 A nursing dog foraging for food retrieved an abandoned baby girl in a forest in Kenya and carried the infant to its litter of puppies, witnesses said Monday.

The stray dog carried the infant across a busy road and through a barbed wire fence in a poor neighborhood near the Ngong Forest in the capital, Nairobi, Stephen Thoya told the independent Daily Nation newspaper.

The dog apparently found the baby Friday in the plastic bag in which the infant had been abandoned, said Aggrey Mwalimu, owner of the compound where the animal is now living. It was unclear how the baby survived in the bag without suffocating.

The infant reportedly was also wrapped in an old tattered shirt.

Resident Linet Gogany said she discovered the child among the dog's puppy litter after local boys said they heard a baby crying.

Doctors said the baby had been abandoned about two days before the dog discovered her. Medical workers later found maggots in the infant's umbilical cord, a product of days of neglect, Hannah Gakuo, the spokeswoman of the Kenyatta National Hospital, where the girl was taken for treatment, said Monday. No one has yet claimed the baby, she said.

But the 7.28 pounds infant "is doing well, responding to treatment, she is stable ... she is on antibiotics," Gakuo told The Associated Press. Workers at the hospital are calling the child Angel, she said.

Unwanted infants are often abandoned in Kenya — sometimes they are even dumped into pit latrines. Poverty and mothers' failed relationships with fathers are often blamed for the problem, and Kenya's weak law enforcement and social security systems means that most people who abandon babies are never caught.

"Abandoned babies are normally taken to the Kenyatta National Hospital because it is a public hospital," Gakuo said. "People are now donating diapers and baby clothes for this one."

Not all abandoned infants in Kenya are as lucky.