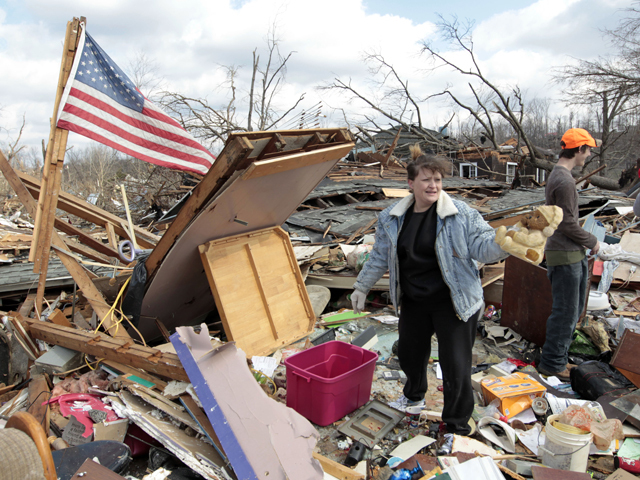 (CBS/AP) WEST LIBERTY, Ky. - Across the South and Midwest, survivors emerged Saturday to find blue sky and splinters where homes once stood, cars flung into buildings and communications crippled after dozens of tornadoes chainsawed through a region of millions, leveling small towns along the way.

At least 38 people were killed in five states, but a 2-year-old girl was somehow found alive and alone in a field near her Indiana home. Her family did not survive. A couple that fled their home for the safety of a restaurant basement made it, even after the storms threw a school bus into their makeshift shelter.

The worst damage appeared centered in the small towns of southern Indiana and eastern Kentucky's Appalachian foothills. No building was untouched and few were recognizable in West Liberty, Ky., about 90 miles from Lexington, where two white police cruisers were picked up and tossed into City Hall.

"We stood in the parking lot and watched it coming," said David Ison, who raced into a bank vault with nine others to seek safety. "By the time it hit, it was like a whiteout."

In East Bernstadt, two hours to the southwest, Carol Rhodes clutched four VHS tapes she'd found in debris of her former home as she sobbed under a bright sun Saturday.

Tornado relief: How to help

"It was like whoo, that was it," said Rhodes, 63, who took refuge with four family members in a basement bedroom that she had just refinished for a grandchild.

The spate of storms was the second in little more than 48 hours, after an earlier round killed 13 people in the Midwest and South, and the latest in a string of severe-weather episodes that have ravaged the American heartland in the past year.

Friday's violent storms touched down in at least a dozen states from Georgia to Illinois, killing 19 people in Kentucky, 14 in Indiana, three in Ohio, and one each in Alabama and Georgia.

The National Weather Service said the four twisters to hit Kentucky were the worst in the region in 24 years. In Indiana, an EF-4 tornado — the second-highest on the Fujita scale that measures tornadic force — packing 175 mph winds hit the town of Henryville, and stayed on the ground for more than 50 miles.

The storms scarred the landscape over hundreds of miles, leaving behind a trail of shredded sheet metal, insulation, gutted churches, crunched-up cars and even a fire hydrant.

The trailer that was once the home of Viva Johnson's mother was sitting in a graveyard on Saturday, covering the dead alongside downed trees and other debris. "You can't even tell where the headstones are," said Johnson, who lives in Pulaski County, Ky.

In Indiana, a toddler was found alone in a field near her family's home after a tornado hit in New Pekin. Authorities learned Saturday she is the sole survivor of her immediate family, said Cis Gruebbel, a spokeswoman for Kosair Children's Hospital in Louisville, Ky.

The girl's mother, father, 2-month-old sister and 2-year-old brother all died Friday, Washington County Coroner Rondale Brishaber said.She is in critical condition with extended family members at the hospital, and authorities are still trying to figure out how she ended up in the field.

"She is in extremely critical condition," Jack Brough, the girl's grandfather, told The Courier-Journal of Louisville. "She's had a lot of injuries to her head. The doctors told us that the next 24-48 hours are very critical."

About 20 miles east, a twister demolished Henryville, Ind., the birthplace of Kentucky Fried Chicken founder "Colonel" Harland Sanders. The second story of the elementary school was torn off, one of the city's three schools lost to weather; the punishing winds blew out the windows and gutted the Henryville Community Presbyterian Church.

A school secretary said a bus left the city's high school Friday afternoon with 11 children, but the driver turned back after realizing they were driving straight into the storm. The children hid under tables and desks at the school nurse's station when the tornado hit; none were hurt, but the building is a total loss.

The school bus was tossed several hundred yards into the side of a nearby restaurant. Todd and Julie Money were hiding there, having fled their Scottsburg home because it has no basement.

"Unreal. The pressure on your body, your ears pop, trees snap," Todd Money said. "When that bus hit the building, we thought it exploded."

Indianapolis Colts owner Jim Irsay has promised $50,000 to the relief efforts for tornado victims in southern Indiana. The Colts announced Irsay's pledge on Saturday. They also asked others to help in any way they can.

The storms hit as far east as Ohio, where the Ohio River town of Moscow was so decimated that rugs hung from the trees.

"This half is gone and that half is damaged," said village native Steve Newberry, who was permitted into town Saturday to pick up medical supplies for his mother.

In Kentucky, the Rev. Kenneth Jett of the West Liberty United Methodist Church was huddling with four others in the basement as the church collapsed.

The pastor and his wife had just returned to the parsonage when he turned on the TV and saw that the storm was coming. Jett yelled to his wife to take shelter in the basement of the church next door, where they were joined by two congregants and a neighbor.

The last one down was Jett's wife, Jeanene.

"I just heard this terrific noise," she said. "The windows were blowing out as I came down the stairs."

The building collapsed, but they were able to get out through a basement door. They escaped with only bumps and bruises.

Janet Elliott was sitting on her bed in Chattanooga, Tenn., when a severe weather warning scrolled across the bottom of the screen. Fierce winds were blowing, and her cats seemed clingy. Her dogs had gotten low to the floor.

She ran to the basement and tried to pull the door shut, but she couldn't. She heard a ripping sound as the ceiling peeled off and wind wrenched the doorknob from her hand.

"I looked up and I could see the sky," she said. "I realized if I had stayed on the bed two seconds longer, I would have been sucked out or crushed."

In Washington County, Ind., residents saw a massive tornado come over a hill and plow through a grove of trees. When the winds had passed, it looked as if a line of bulldozers had rolled through.

Gene Lewellyn, his son and his son's 7-year-old daughter saw the tornado come over the hill, rushed to the basement of his one-story brick home and covered themselves with a carpet.

"It just shook once, and it (the house) was gone," said Lewellyn, 62, a retired press operator.

Friday's tornado outbreak had been forecast for days; meteorologists at the National Weather Service's Storm Prediction Center had said the day would be one of a handful this year that warranted its highest risk level. The weather service issued 297 tornado warnings and 388 severe thunderstorm warnings from Friday through early Saturday.

It was a distinction without a difference for Lewellyn, who spent Saturday picking through the debris in 38-degree cold. His family was safe, but their home was reduced to a pile of bricks and sheet metal wrapped around splintered trees. Pieces of insulation coated the ground, and across the street a large trailer picked up by the storm had landed on top of a boat.

"Right now, we are not sure what we are going to do," he said. "We all get out what we can get out."