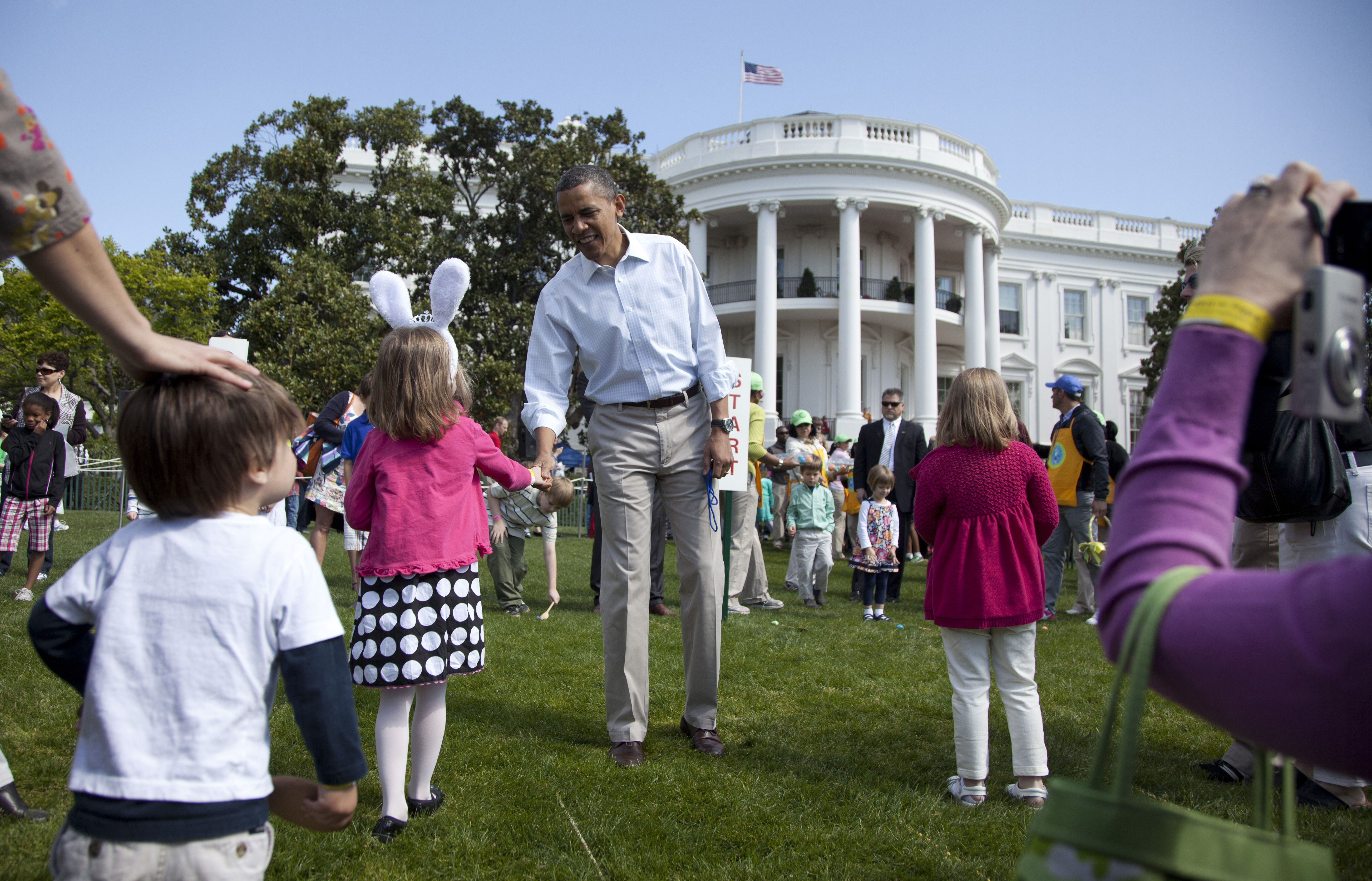 Brightly colored, hard-boiled Easter eggs, trundling through the grass at the head of a long-handled wooden spoon: With snow flurries in spring and the on-again-off again courtship between President Obama and congressional Republicans, the 100-something-year-old tradition just might be the most predictable thing in Washington.

More than 35,000 people from all 50 states Monday will descend on the South lawn of the White House for the 135th annual Easter Egg Roll - food, games and live music, geared at kids and the young-at-heart. Headlines during the Obama family's four-year run have ranged from standard hoops time to push-ups with the Harlem Globetrotters to a dramatic, "teeth-gnashing" reading of "Where the Wild Things Are." This year, the lineup includes cooking stations manned by "Food Network" stars, a yoga garden and an "Eggtivity Zone" obstacle course.

Jordin Sparks, Coco Jones, Danica Patrick, The Wanted and Quvenzhane Wallis are among the celebrities who have RSVPed. The White House has also announced expected appearances by Robby Novak, "Kid President," Bugs Bunny, Dora the Explorer, the Cat in the Hat, Snoopy, Mr. and Mrs. Potato Head, Spongebob Squarepants, Pac-Man and the Mighty Morphin Power Rangers.

But the highlight, of course, is the egg roll, which Time magazine several years ago described as a "European custom of murky origin wherein a hard-boiled egg is pushed, dragged, flung or otherwise propelled across a lawn with a long-handled spoon." Historians quarrel over when exactly the tradition arrived in the capital - some say it was a brainchild of first lady Dolley Madison; others argue informal egg-rolling parties date back to President Lincoln's administration.

The official start of the Egg Roll as an annual White House affair, though, was in 1878. Earlier in that decade, Washingtonians had made a custom of gathering "Easter Monday" on the Capitol Hill lawn to have their egg-rolling fun. Unhappy with its toll on the landscaping, then-President Ulysses S. Grant signed into law in 1876 a ban on the practice; a decision that two years later inspired egg-rollers to effectively storm the gates of the White House, their eyes on the sloping scape of the property's South Lawn.

Rutherford B. Hayes kindly obliged, and seven years later, Grover Cleveland boldly moved to allow the egg-wielding enthusiasts to bring their games inside, to the East Room, where carpets year after year were left "ground full of freshly smashed hard-boiled egg and broken shells," according to the White House Historical Association.

As the annual event began to etch a spot in the history books, public interest skyrocketed - Time reports 53,000 people attended in 1941. To rein in the number, the White House instated a rule qualifying that a "grown person would be admitted only when accompanied by a child," and vice versa, a decision that ultimately led to children racketeering their time to unaccompanied adults.

It's not all fun and games: Over the years, the Egg Roll has also become a bully pulpit for the president's agenda. Though his stated support for same-sex marriage would not come for three years, in 2009 Mr. Obama went out of his way to encourage gay families and their children to attend. In 2006, same-sex couples "crashed" President George W. Bush's Egg Roll to remind him "that gay families exist in this country," according to Time.

The influence and personalities of first ladies, too, shine at the Egg Roll. Grace Coolidge used to parade her pet raccoon Rebecca through the crowds; in 1933 Eleanor Roosevelt opened the event to listeners across the country, via radio. This year's activities, themed "Be Healthy, Be Active, Be You!" pack a punchy focus on healthy eating and exercise - an arm of first lady Michelle Obama's "Let's Move!" initiative.

One consequence of Washington's current political climate no doubt leaves many planning to attend grateful an Egg Roll is happening at all. Last month, as the administration was drowning under flak from the right over its decision to suspend White House tours as part of its cutbacks following sequestration earlier this month, a memo went out to members of Congress disclaiming the event could be cancelled pending passage of the continuing resolution, which cleared Congress two weeks ago and was signed by the president last week.

The entire day's festivities will be broadcast on the White House website - a practice begun by then-President Bill Clinton in 1998.