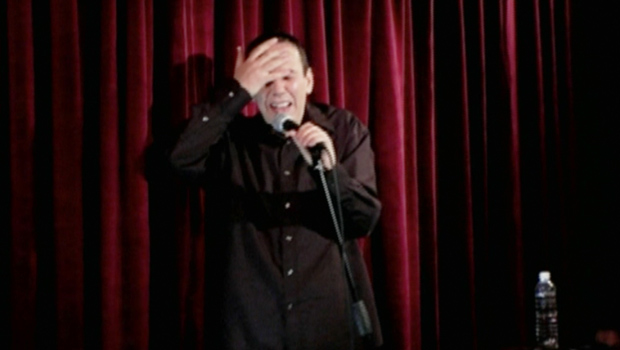 "Dying is easy . . . comedy is hard!" It's an old-time theater world adage that rings true with stand-up comics today. Our Mo Rocca has talked to a few of the best:

Wanna hear something funny? When a comic does well, it's said that she killed! But a bad performance, that's called dying. And it really hurts.

Comedian Susie Essman ("In my generation, safe sex is when you did it without handcuffs") remembers every time she's died on stage: "Afterwards you lie in bed at night and you go through the set and you're like, 'What happened? How did I lose them? What happened?'"

On HBO's "Curb Your Enthusiasm," Essman was hilarious and tough-as-nails. But she shudders recalling one grisly near-death experience:

"There's a guy sitting right in front with his back to me," she told Rocca, "and the guy never turns around. And this starts to really, really bother me. And I go after him. I'm just lacing into him and just how rude he is and blah, blah, blah, blah. And there's a hush. I lost the audience. Then I notice there's a seeing eye dog next to the guy. He was blind! And he had his back to me 'cause it didn't matter which way he was facing, he was blind.

"So now I gotta get them back. So the way I got them back was I turned myself in. I had to say, 'Alright, now, I picked on the blind guy. I'm the worst person in the whole world.' And I got them back."

Essman was asked if dying is something that a comic needs to go through. Yes, she replied.

"I would say I've learned more from my bad sets than my good sets. If there's a comic out there that has told you they have never died, they're either completely delusional or they're lying."

Joan Rivers ("How stupid do I look? Don't answer that!) is a comedy legend. But even legends can lose an audience.

After nearly 50 years on stage, the fear of dying still grips her. She described the feeling as "terror."

"I'm dreading that they're not going to think I'm funny, and then I'm back to first grade," Rivers said.

"Like when you try to make a friend and somebody says, 'I don't want to be friends with you'?" said Rocca.

"It's that basic: We don't like you. We don't want to be your friends. It's terrible!"

Imagine how terrible it is when you're still struggling to make it. Simeon Goodson has a full-time job with the City of New York, but he's been pursuing the dream of a stand-up career for 10 years.

"When I got arrested, they took my license ... You know what's even worse than that? They called my mother up! Like, 'Oh my God, what are you doing?'"

To Goodson, his jokes are like children: "Yeah, like, these are my kids. Let me introduce you to these kids. They sing and dance. And then people are like, 'Wow, those songs and dances were awful! I hate your kids, and I hate you for raising them that way.' And you're like, Oh, wow!"

Gilbert Gottfried ("Calm down! The act is not going to be that funny") has been staring down death since the age of 15. He told Rocca, "Even if I bombed horribly, I still had to go back."

"When people talk about dying, is dying the word for it?" Rocca asked.

"Uh, yeah. Yeah. It's like when people ask me: 'Did you ever die on stage?' It's like saying to an Olympic swimmer, 'Did you ever get wet?' 'So, you're a championship fighter -- did anyone ever punch you in the face?'"

Gottfried knows of what he speaks. Three weeks after the 9/11 attack on the World Trade Center, at a Comedy Central/Friar's Club roast of Hugh Hefner, he told this joke:

"Oh, I have to leave early tonight. I have to fly out to L.A. I couldn't get a direct flight. We have to make a stop at the Empire State Building."

"Forget it -- I lost an audience like no one could lose an audience before," Gottfriend said. "And I mean, they were booing and hissing. And if you had told me from that moment of time, after that joke, that I was there for 10 years, I'd believe you."

But Gottfried recovered, and slayed the audience by telling a joke so dirty, we could never show it here.

Rocca asked, "Do you ever die now?"

"Yes," Gottfried replied, "during this interview!"

Joan Rivers and daughter Melissa have their own cable series. But Joan -- at 80 -- still risks death live on stage. The title of her upcoming tour: "Quick, Before They Close the Lid!"

"This is horrible, but how do you think actual death will compare with dying on stage?" asked Rocca.

"I think actual death will be a lot easier than dying on stage," Rivers said, "'cause, you know, if you do it right, you can go looking good, maybe with a little quip: 'I loved everybody.' But dying on stage: Luh-luh-luh-luh. Oh, God!"

Rivers said the shame of dying on stage lasts about 24 hours, "until the next night when you go onstage and you prove, 'No, no, no. I'm right. They were wrong.'"

WEB EXTRA: A funny way to die
Stand-up comedian Tony Bock describes the special pain of his worst set ever -- and boy, was it bad.