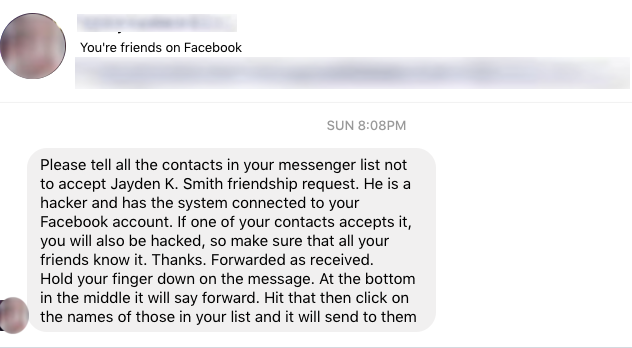 Who is Jayden K. Smith, anyway?

That's a question a lot of Facebook users have been asking after receiving paragraph-long warnings from friends over the weekend about an alleged hacker.

Some users have reported receiving dozens, even hundreds, of messages in the span of a few days. And each one read the same:

Please tell all the contacts in your messenger list not to accept Jayden K. Smith friendship request. He is a hacker and has the system connected to your Facebook account. If one of your contacts accepts it, you will also be hacked, so make sure that all your friends know it. Thanks. Forwarded as received. Hold your finger down on the message. At the bottom in the middle it will say forward. Hit that then click on the names of those in your list and it will send to them.

"Anybody know the validity of this message? I've received it at minimum 150 times today," one Facebook user asked followers on Monday.

"My friends keep sending it to me," another added.

The message, which has since gone viral, asks users to pass along the information to everyone on their contact list. So, that's exactly what people have been doing.

But there's a problem — the message is a hoax.

Facebook confirmed to CBS News on Tuesday that it's aware of the hoax and has been assuring users that accepting a friend or message request would not allow a user to gain access to your private information — even if that person is named Jayden K. Smith.

"We're aware that some people are sharing a forwarded message with their friends on Messenger implying that their account may be at risk. This is a hoax," a Facebook spokesman told CBS News via email. "Accepting a friend request on Facebook or Messenger does not give anyone control of your computer or online accounts."

According to fact-checking website Snopes.com, the hoax has been around for years.

"Variants of these messages are circulated endlessly, with different names swapped in and out as various pranksters decide to play jokes on people they know by inserting their acquaintances' names and addresses into the warning in place of the existing information," Snopes reports. "The most common variant of this hoax is one that warns the reader not to accept Facebook friend requests from 'hackers.'"

While this message is a confirmed fake, users should continue to use caution when accepting friend requests from strangers.

"Scammers may create fake accounts to friend people. Becoming friends with scammers might allow them to spam your Timeline, tag you in posts and send you malicious messages," Facebook warned.

If you're one of the users who forwarded the hoax to your friends, don't worry, it's probably not the first — and certainly not the last time — someone has been duped by a viral Facebook post.