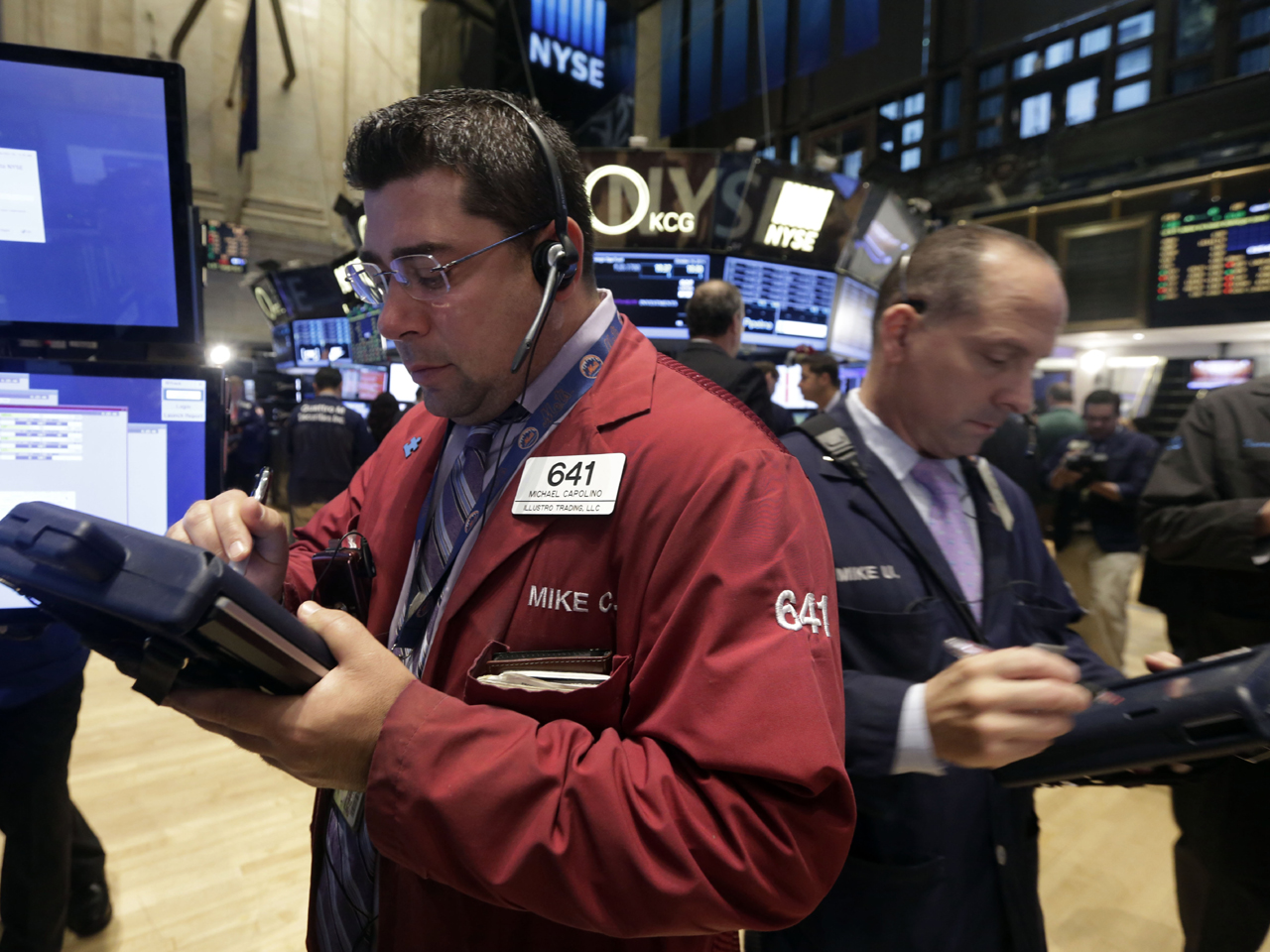 U.S. stock indexes recovered from a steep decline and ended the day mixed, following a wild ride a day earlier.

Investors were combing through the latest batch of corporate earnings and a dash of new economic data for clues about the prospects for global economic growth. A key highlight: U.S. unemployment aid applications fell last week to the lowest level in 14 years, another sign that the job market is strengthening.

"We had some positive economic data that reminded everybody that the economy is doing quite well," said Randy Frederick, a managing director of trading and derivatives with the Schwab Center for Financial Research.

The Dow Jones industrial average sank as low as 206 points in the first hour of trading, then turned slightly higher an hour later. The Dow ended the day 25 points down to 16,117.

The latest swings in the market reflect a surge in volatility as investors worry that global growth with slow and that Europe could slip into another recession. That could affect the U.S. economy and hurt corporate profits.

On Wednesday the Dow plunged as much as 460 points, then recovered much of that loss to close down 173.

The S&P 500 and Nasdaq are up slightly for the year after being down a day earlier. The Dow remains down 3 percent for the year.

Netflix (NFLX) plunged 21.8 percent after the company's subscriber growth fell short of its own forecasts following a rate increase. The stock slid $98.13 to $350.89.

Investors cheered earnings from Delta Air Lines, which reported results early Thursday that beat analysts' forecasts. The stock, which has been pummeled this week amid worries about the impact that worries about the Ebola virus might have on bookings, rose 34 cents, or 1.1 percent, to $32.72.

The number of people seeking U.S. unemployment aid fell to the lowest level in 14 years last week, the Labor Department said. The decline is the latest sign that the nation's job market is strengthening.

The Federal Reserve reported that U.S. factory production rose 0.5 percent in September from the previous month. Over the past 12 months, manufacturing output has risen 3.7 percent.

Meanwhile, an index of U.S. homebuilders' confidence fell this month after four months of gains. The latest reading still reflects that most builders view sales conditions as good, however.

Seven of the 10 sectors in the S&P 500 fell, led by a 0.9 percent decline in consumer staple stocks. Energy stocks paced the gainers.

U.S. Treasury yields have dropped sharply in recent days on expectations that the world's economic sluggishness could force the Federal Reserve to delay interest rate increases.

On Thursday benchmark U.S. government bond yields were little changed from the day before. The yield on the 10-year Treasury note rose to 2.16 percent from 2.15 percent late Wednesday.

In Europe, the biggest concern was Greece, where investors are worried the country might need more financial support as its government borrowing rates have risen sharply in recent days.

The rise suggests Greece is unlikely to be able to wean itself off its bailout loans as hoped, because borrowing on bond markets independently would be too expensive.

Though lower oil prices can help consumer spending, they can weigh on inflation and squeeze the profits of energy companies.