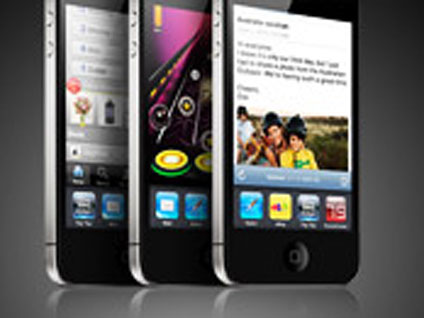 On Friday, Apple confirmed user complaints about reception problems with the new iPhone 4, cautioning that signal degradation might occur if users gripped the bottom-left corner of the device in a certain way.

Apple's official advice was to avoid holding the unit in way that covers both sides of the black strip in the metal band. Or, the company suggested, go out and buy "one of many available cases."

The iPhone 4's two antennas are built into the steel band on the exterior of the device. The one running on the left side of the phone is for Bluetooth and Wi-Fi, while the one on the right is for cellular reception. For left-handers, that means they'll likely grip the phone differently than right-handed people.

But in an e-mail to a customer, CEO Steve Jobs seems to have a slightly different take on the affair.

"There is no reception issue. Stay tuned," he wrote in a response to a user who wrote Jobs directly.

Jobs' one-liner appears to contradict his earlier advice where he advised a user to "just avoid holding [his phone a particular] way." Apple did not reply for comment by the time this post went up.

It is possible that Jobs is simply tipping the company's hand in advance of a rumored software update to iOS 4 that would resolve the problem.

AppleInsider is reporting that information about the software fix was found in comments on Apple's tech support forums before being pulled down.

Whatever confusion still attends the antenna issue, there's little sign that it has impacted early demand. On Friday, an analyst for Oppenheimer estimated first-day sales at over 1.5 million. By comparison, Apple sold 1 million iPhone 3G units the first weekend it was available for puchase in 2008, and 1 million iPhone 3GS units during its first weekend on sale in 2009.