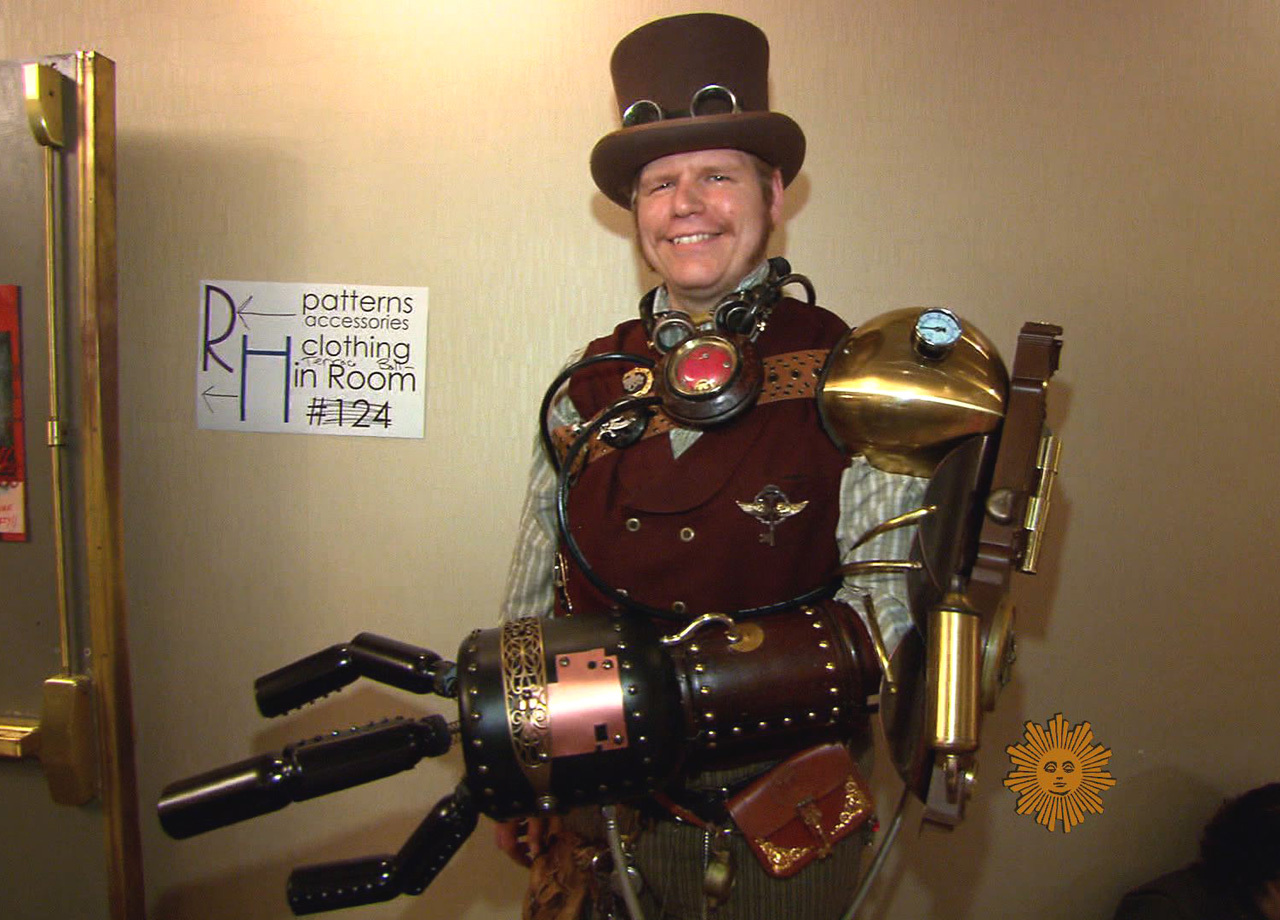 Welcome to the annual Steampunk World's Fair in Somerset, N.J. - only an hour's drive from Manhattan, but in spirit over a century removed from the present day.

One attendee said her prominent corset was comfortable: "Oh yes, absolutely. It's very supportive and it encourages good posture." Like a sports bra, noted Rocca.

Corsets and goggles and gears, oh my! And weaponry of all shapes and calibers, like the steam-powered ray gun. If you came unarmed, or under-dressed, dozens of vendors fill the fair with suitable steampunk wear.

By now you're probably wondering, what IS steampunk?

"Steampunk is yesterday's tomorrow," is one fan's description. Or "A science fiction version of Victoriana." Or "The intersection of technology and romance."

The Victorians were obsessed with technology, imagining a world of elaborate contraptions, many of them airborne. Flights of fancy powered by steam, the fuel behind the Industrial Revolution.

In the Steampunk universe the Victorian vision of the future - adventurous and optimistic - has come to pass - an IDEAL version of the past.

"So it's the Victorian Era without all the disease and pestilence?" asks Rocca. "Yeah, absolutely!" said one devotee.

Jake von Slatt came to the fair in HIS steampunk (well, his diesel-powered bus).

If the Victorians had had computers, von Slatt's is what one might have looked like, framed in brass. Lovely. And expensive. The keyboard sells for over a thousand dollars

"I wanted a computer that would look at home, say, aboard Captain Nemo's Nautilus," von Slatt said.

Jules Verne's "20,000 Leagues Under the Sea" is one inspiration behind steampunk. So is the classic 1960s TV show "The Wild, Wild West," which featured in one episode a steam-powered mandroid controlled by a church organ operated by an evil dwarf!

This is a big year for steampunk, with dozens of new books out, including "The Steampunk Bible." It documents how imaginative steampunkers can get.

But if you're shopping for something more practical, there's von Slatt's electrical device that, when cranked up, can cure hiccups (or at least give Rocca a really good shock).

The steampunk style is showing up in movies like Martin Scorcese's "hugo," and the Robert Downey Jr. version of "Sherlock Holmes."

And meet Paul Alborough: Schoolteacher by day, but by night he becomes "Professor Elemental," a steampunk Victorian rapper. Prof. Elemental raps about tea and trousers and splendidness.

He's played a lot of steampunk gigs and says this extravaganza is exceptional. "This one is a little bit different from anything else that I've seen. It's like the eccentricity dial has been just dialed just a little bit," Alborough said.

Case in point: The remote-controlled dirigible of Captain Leviticus Finch (not his real name), which flew as high as the ceiling (and his gas tank) allowed. "It's a little low on helium, 'cause it has a leak," he admitted.

And yes, my friends, there were steampunk jetpacks.

Sky pirate "T-bore Manaschevitz" displayed his jetpack, fashioned out of a ceiling fan. Later on, Rocca discovered some really nice jetpacks that didn't look like they'd been hot-glued together. Slipping one on, Rocca was told he could fit right in to the crowd. "Of course, you may ask, would I WANT to fit in?"

When asked to explain steampunk fandom, Alborough said, "I think it's like live action role playing games, and comic books and movies, it's that escapism. You can take it in any different direction that you want to - spend a day as an airship captain or a sky pirate or an evil villain or whatever it is you might want to do. And you can change that from day to day as well."

But does a movement so firmly rooted in the past really have much of a future? Rocca did see a lot of families and quite a few children, in costume and in utero.

Marisa Taylor (whom you could call the mother of steampunk) was expecting, but she's a 21st century woman when it came to birthing: "We're not going to do it Victorian style," she told Rocca. "I want medicine, I want drugs, I want a bed that's nice!"

The universal nostalgia for "Take Me Home, Country Roads"

Alex Jones and his "whole world of trouble"
Thanks for reading CBS NEWS.
Create your free account or log in
for more features.
View CBS News In
CBS News App Open
Chrome Safari Continue
Be the first to know
Get browser notifications for breaking news, live events, and exclusive reporting.