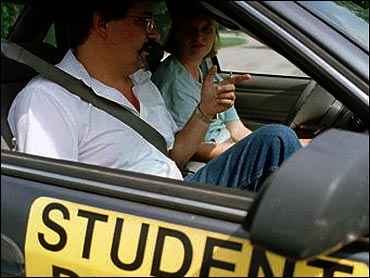 Taking aim at a longstanding rite of passage for 16-year-olds, an influential auto safety group is calling on states to raise the age for getting a driver's license to 17 or even 18.

Adrian Lund, president of the Insurance Institute for Highway Safety, a research group funded by the auto insurance industry, acknowledged the idea is "a tough sell," but noted that car crashes are the leading cause of death among teenagers.

"The bottom line is that when we look at the research, raising the driving age saves lives," Lund said. He plans to present the proposal Tuesday at the annual conference of the Governors Highway Safety Association in Scottsdale, Ariz.

Not surprisingly, a lot of teens hate the idea.

"I would really be upset because I've waited so long to drive," said Diamante White, a 16-year-old in Reading, Pa., who got her permit in July. She said learning to drive is a "growing-up experience."

Many parents agree. They also like not having to chauffeur their teens to school, sporting events and any number of other places.

"Do we really want our kids dependent upon parents for virtually everything until they go to college, can vote and serve their country?" asked Margaret Menotti, a mother in Uxbridge, Mass.

She argued that keeping teens from driving would only make them less responsible. Some parents also find it ironic that this conversation is happening just as a group of college presidents have proposed lowering the drinking age to 18.

Among other things, institute researchers have compiled decades worth of data from New Jersey, the only state that issues licenses at 17. Various studies have shown that the overall rate of teens killed in crashes in New Jersey has been consistently lower than in some nearby states.

One study from the 1990s found that the rate of crash-related deaths among 16- and 17-year olds were 18 per 100,000 in New Jersey, compared with 26 per 100,000 in Connecticut. Those rates, researchers said, have dropped even further since both states instituted graduated driver's license programs.

Graduated licensing, which has become the standard across the country in the past 15 years, requires teens to spend more time driving with a parent or other responsible adult before they go solo. Though these rules are sometimes difficult to enforce, many states tie these more stringent standards to declining teen crash rates.

Illinois now has one of the toughest graduated licensing programs, reports CBS News correspondent Cynthia Bowers. Brent Johnson, who's been teaching kids to drive at suburban Chicago Hinsdale High School for 34 years, helped push through the restrictions, which require 100 hours of supervised driving and only one passenger for new drivers.

"We got tired of seeing our kids die on our highways," Johnson told Bowers. "Up through July, the end of this July this year, we've seen a 47 percent drop in fatal crashes>"

More than 5,000 U.S. teens die each year in car crashes. The rate of crashes, fatal and nonfatal, per mile driven for 16-year-old drivers is almost 10 times the rate for drivers ages 30 to 59, according to the National Highway Safety Administration. Many industrialized countries in Europe and elsewhere have a driving age of 17 or 18.

Barbara Harsha, executive director of the Governors Highway Safety Association, said she welcomes a debate on raising the driving age - as do many who deal with public health.

"Getting the highest of the high-risk drivers away from the wheel probably isn't a bad idea," said Dr. Barbara Gaines, trauma director at Children's Hospital of Pittsburgh of UPMC.

But she and others - even the Insurance Institute officials who propose raising the driving age - agreed it is not the only option.

Gaines noted that teen drivers in the Pittsburgh area who have committed moving violations must attend a "reality education" program at her hospital. They tour the intensive care unit and talk with young drivers who have been in serious crashes.

Andrea Summers, coordinator of the teen driving program for the Delaware Office of Highway Safety, said her state and others have chosen to toughen laws without raising the driving age - by banning teens from using cell phones while driving, imposing stricter driving curfews and expanding supervised driving time. Even New Jersey is considering lengthening the time a young driver has a permit, from six months to 12.

Still others say we are worrying too much about teen drivers, and not enough about others who cause serious problems on the road.

Karen Sternheimer, a University of Southern California sociologist who studies accident statistics, cited federal data from 2007 showing that drivers ages 25 to 34, as well as those ages 45 to 64, were nearly twice as likely to be involved in alcohol-related fatalities as 16- to 20-year-old drivers.

"The intense focus on teens diverts our attention from the real threats to public safety: speeding and driving while intoxicated," she said.