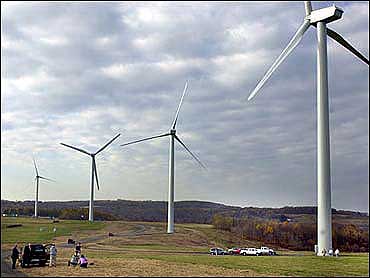 The same week that automakers sought billions in aid to avoid bankruptcy, two states, including Michigan, announced huge alternative power industry investments, with one site being built on land once set aside to lure auto manufacturers.

Manufacturing strongholds hardest hit by job losses years ago began laying the groundwork to land green jobs and may now be poised for the biggest gains, depending on federal economic stimulus funding.

The $900 billion economic package before Congress has more than $50 billion in energy-related incentives.

President Barack Obama has set a goal of doubling the use of renewable energy in three years, potentially placing states with established programs in a position to replace thousands of manufacturing jobs lost over the last decade.

The state, which has lost more than 150,000 automotive jobs over the past eight years, began using community colleges to retrain the unemployed and underemployed for green jobs.

"Employers, if you come to Michigan, we will deliver trained employees to you," Gov. Jennifer Granholm said. "And employees, we will pay for your training, but the kicker is you've got to agree to be trained in an area that we know we have need in."

The alternative energy industry, like others, is being shaken right now by a wave of layoffs and bankruptcies. Without help from the government, analysts are forecasting double digit declines in business and installations.

States continue to look beyond the current economic downturn, however, and many expect a boom in alternative energy investments ahead.

The competition to lure green industry jobs heated up several years ago, and is expected to grow even tighter with more money in play.

Federal proposals include $32 billion to upgrade the nation's electrical distribution system, more than $20 billion in tax cuts to promote the development of alternatives to oil, and billions more to make public housing, federal buildings and modest-income homes more energy efficient.

Glen Andersen, of the National Conference of State Legislatures, said states began lobbying for green jobs long before it was known that Washington might sweeten the investment pot.

"They definitely are just looking at their own interests and not considering the federal government," he said.

Denmark-based Vestas Wind Systems said it would invest $680 million in Colorado and employ as many as 2,450 people in the state by 2010.

A trained work force and a transportation infrastructure to move raw materials are what launches a community to the top of a company's list, Burkhardt said.

"Incentives are just icing on the cake, and they usually are used to differentiate finalist communities," he said.

Hexcel Corp., a British wind turbine component maker, recently announced plans to build a facility next to a Vestas plant in Colorado.

Pennsylvania, which was hit by contraction in the steel and manufacturing sectors, began seeking out alternative power companies long ago, and landed Spanish wind energy manufacturing giant Gamesa six years ago.

Today, Gamesa has its U.S. headquarters in Philadelphia and facilities further west in Ebensburg and Fairless Hills, at a former U.S. Steel site.

Add-on projects that come with big alternative energy deals are getting increased attention.

Michigan is extending tax credits to suppliers of alternative energy companies as well.

"If they lure any of their supply chain into Michigan, we will give them a tax break in addition to the tax breaks we would give to the companies they're luring," Granholm said.

Hemlock Semiconductor Corp., which is building the giant manufacturing facility originally intended to lure an auto company in Tennessee, plans to spend more than $2.2 billion to expand solar operations in Michigan.

James Chavez, president of the local economic development council, said the 1,215-acre site near the Kentucky border was originally being prepped to lure in an auto manufacturer.

Yet he and others were waiting and preparing for companies like Hemlock.

"If communities are not already prepared for these types of projects, they're probably going to be a long way from getting there," he said.

Schott Solar Inc., a subsidiary of Schott AG of Germany, announced last year that it would build a $100 million photovoltaic production facility in Albuquerque, but only after the state beat out nearly a dozen other states and 17 countries for the project.

"We see that frequently," he said.
By AP Energy Writers Dirk Lammers and Sandy Shore