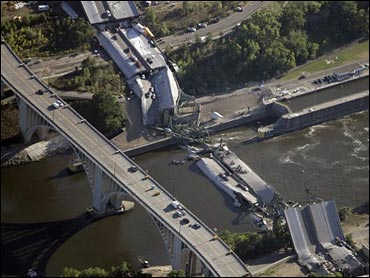 It was the height of the afternoon rush hour when a seemingly sturdy Minneapolis bridge suddenly came apart at the seams - taking 13 lives down with it.

It was a wake-up call about the nation's crumbling infrastructure, CBS News correspondent Nancy Cordes reports.

The country's 152,000 structurally deficient bridges would cost $140 billion to fix.

"The states have started to step up, which is good," said Andrew Herrmann of the American Society of Civil Engineers.

Herrmann, a bridge expert, says the Minneapolis collapse has spurred several states to get creative.

Missouri made a deal with a single contractor to improve 800 of its worst bridges and maintain them for 25 years.

"There is no way on this good God's earth that Pennsylvania alone can come up with that type of funding," said Rendell. "So this is something that's gonna need state and local and federal cooperation."

But federal cooperation has been slow in coming. Congress is still debating a bill proposed right after the collapse to provide $1 billion for emergency bridge repairs.

"If you had enough funding, what would you do?" Cordes asked Nick Roper, a chief bridge engineer for Northern Virginia, one year ago.

"I would replace every deficient bridge that's in my district," he said.

"Last year at this time you told me you have 30 deficient bridges in your district. How many do you have now?" Cordes said.

And it's happening nationwide, which may not be a bad thing. After investigators determined that the Minneapolis bridge lacked proper support, 750 similar spans underwent thorough inspections.

"As a result of that, I believe significantly more bridges have been strengthened … in a way that enables them to be much safer than they were before," said Mark Rosenker, chairman of the National Transportation Safety Board

Sadly, it took a tragedy to start the nation on what is going to be a very long and expensive journey.