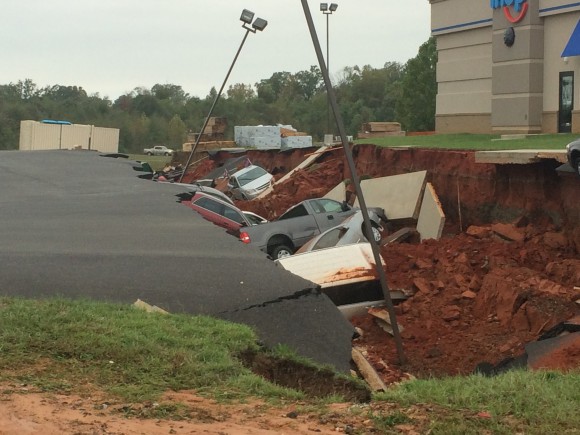 MERIDIAN, Miss. - It's not every day that a giant hole opens up in an IHOP parking lot, swallowing more than a dozen cars suddenly, which is why Meridian Mayor Percy Bland declared a state of emergency on Monday.

Bland says engineers are trying to determine what caused a drainage structure to collapse beneath the parking lot of a new restaurant, opening a gap that swallowed at least 14 vehicles on Saturday evening.

Bland said the state of emergency will allow the city to remove the vehicles and to hire engineers to assess the collapse.

Bland said in a news release Monday that 10 cars, three sport utility vehicles and a pickup truck are visible.

No one was hurt when the parking lot collapsed Saturday night at the newly opened IHOP restaurant on an Interstate 20 frontage road.

The collapse opened a hole 30 feet wide and 360 feet long. It follows a culvert that channels water to a creek.

"It worries me because me and my wife intended to come down here this weekend to eat breakfast," said Donald. "We love IHOP."