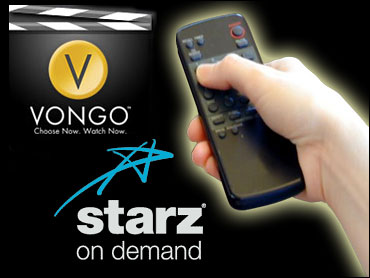 The service will provide the content critical for the success of a number of devices that will be introduced at the annual Consumer Electronics Show, which kicks off in Las Vegas this week. Video delivered over the Internet will be a key theme at this year's show.

The service, dubbed "Vongo," is available for a monthly subscription of $9.99 and will eventually include more than 1,000 movies, short films and other programs. The films will be available at the same time they are offered on the Starz premium movie cable channel, about five to six months after they are released on DVD.

Users will be able to download as many films as they want each month to up to three devices, including Windows-based computers and portable devices running Microsoft's Portable Media Center software.

A smaller number of films will be available several months sooner for a pay-per-view fee of $3.99. Subscribers will also be able to watch a live, streaming video feed of the Starz TV channel.

Enderle and other analysts also said the service will reinvigorate the market for portable devices, such as the ones already offered by Creative Technology Ltd. and iRiver. The devices have not taken off, in large part because of a lack of compelling content, most notably big studio movies.

Starz said its Vongo service will also be a key feature of the Sony Connect video service set to launch later this year.

A number of newer, smaller portable devices will be introduced this week and over the next several months to compete with Apple's video iPod, which can play select ABC and NBC TV shows.

Portability also will make it easier for films downloaded to a computer to be viewed on a TV, where most people prefer to watch movies.

Films downloaded from existing online movie services, including Movielink, a joint venture of five Hollywood studios, and CinemaNow, which counts studio Lions Gate as an investor, can be viewed on a TV. But the process involves stringing a cable from the computer to the TV set. Wireless home networks are not yet robust enough to handle the large video files.

Viewers will still have to attach a cable from a smaller portable device to a TV, but it will be easier to carry a movie from a computer in an office, say, to a TV in another part of the house.

"It's not elegant, it's not perfect, but it's a step," Behrens said.

The Starz service will not include films from every studio. It has exclusive rights to films from The Walt Disney Co. and Sony Pictures and has licensed some films from other studios.

Home Box Office and other premium cable services have rights to distribute films from other studios, but have not launched similar online services.

Starz is a subsidiary of Liberty Media Corp. and is based in Englewood, Colo.