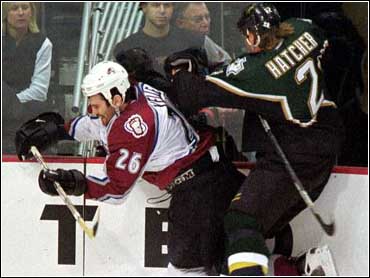 Patience is paying off for Mike Modano and the Dallas Stars.

"It has just been a lot of patience and not really expecting too much going into the game," said Modano, who scored his 26th goal midway through the third period.

He has 10 goals and nine assists in his last 13 games.

"The streak has come from being very defensive oriented, knowing where we are at on the ice and what position we have on the puck and making smart plays with it," Modano said.

Modano's goal was proof of that patience. Rather than shooting, Sergei Zubov waited for Colorado goalie Marc Denis to go down to the ice before feeding Modano for a better scoring chance.

Ed Belfour made 23 saves for the Stars, allowing only Alex Tanguay's power-play goal with 11 seconds remaining.

"I thought we played a very strong game," Dallas coach Ken Hitchcock said. "We saw what Colorado did the last couple of games offensively and knew we had to check pretty well if we were going to win."

Colorado's second-ranked power-play unit was 1-for-4 and managed only four shots with the man advantage.

Backup Marc Denis made 28 saves for the Avalanche. He started in place of Patrick Roy, sidelineby a groin injury.

"We're coming off a tough road trip and had to face Dallas," Colorado center Peter Forsberg said. "We couldn't get anything going."

Dallas dominated play for the first two periods, outshooting the Avalanche 12-10, but managed only a 1-0 lead on Thornton's third goal of the season midway through the first period.

The Stars didn't allow Colorado a shot on goal until six minutes into the game, with Belfour easily turning Stephane Yelle's deflection from the front of the crease.

Thornton's goal, his first since Dec. 20, was the result of Chris Drury's inability to clear the puck past Richard Matvichuck. Thornton beat everyone to the puck and tucked it behind Denis, who was out of position after stopping Brett Hull's shot.

The Stars, the NHL's top penalty-killing team, faced only two shots in killing two penalties in a scoreless second period.

"We had a hard time generating offense, but we made their job fairly easy," Colorado coach Bob Hartley said. "Our legs were not moving and we always seemed to be on the outside and never challenged the middle."