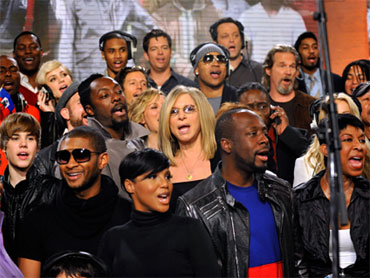 More than 75 stars gathered to re-record the 1985 charity anthem "We are the World" in the same Hollywood recording studio where the original was cut 25 years ago.

At one point during the session, the musicians broke out into an a cappella version of the pop classic "Lean on Me."

True to her diva reputation, Barbra Streisand recorded her solo over and over, completely absorbed in the recording process and stopping only to correct her pitch.

Rapper Lil' Wayne was told he would do Bob Dylan's part in the original song.

"I said, 'Are you kidding?"' he said. He felt blessed to record the song but admitted, "I don't know how to sing."

Asked how the earthquake had affected him, he said he had Haitian friends in Miami who lost relatives in the disaster.

Quincy Jones, who produced the 1985 anthem, announced last week that he planned to redo the song to benefit recovery from the deadly Jan. 12 earthquake in Port-au-Prince.

Written by Michael Jackson and Lionel Richie, the original "We Are the World" thundered up the charts when it was released on the radio and in record stores in March 1985.

None of the original performers returned for the re-record.

The 1985 record raised more than $30 million for USA for Africa, a nonprofit organization founded by the singers to fund hunger relief in African nations.

While reporters watched a video feed of the session in a nearby room, stars like West mingled outside with friends and greeted his buddy, Snoop Dogg, with a hug.

Nicole Richie and "Good Charlotte" singer Joel Madden showed up with their 2-year-old daughter Harlow, whom Madden bounced in his arms to the beat of the music.

Julianne Hough from "Dancing with the Stars," who is also a country singer, said she felt honored to lend her voice to the effort and sing next to so many talented musicians.

"It's just iconic. Celine (Dion) is just so gracious and amazing and such a pro," she said.