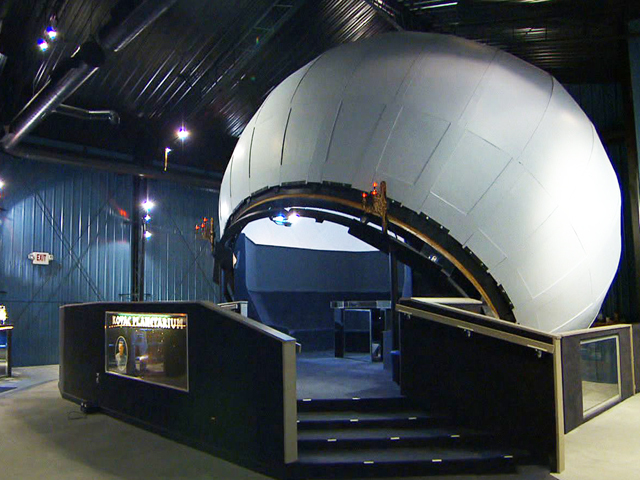 (CBS News) MONICO, Wis. -- Here in the North Woods of Wisconsin, a job in a papermill is about as good as it gets. But for 47-year-old Frank Kovac, this was his second choice.

As a little kid, he dreamed of exploring outer space, which is why Frank has spent pretty much his entire adult life charting his own course for the stars.

"The neighbors thought I lost my mind," Frank says.

Robert Briggs is town chairman of Monico, Wis., the town where Frank launched his space program. Monico has a three-pump gas station, a two-bit bar and now, thanks to Frank, one remote planetarium.

"This is the most remote planetarium in the world," Frank says.

Frank basically built it in his backyard.

"To be a planetarium director, you need college, but if you build your own, you can run it," he says.

Using the money he made at the papermill, Frank opened to the public in 2007, although, when we first visited a few years ago, business was far from stellar. Needless to say, visitors could usually get right in.

Because Frank couldn't afford a fancy projection system to mimic the revolution of our planet, he came up with a way to move the heavens instead.

As for the individual stars, Frank says, "I took luminous paint and I painted every single star that you would see out in the night sky ... Like a friend told me, he would have just taken the paint and thrown it up there and hoped it hit the right area."

Watch: Our first visit to Frank Kovac's planetarium in 2010, below.

There are 5,000 -- each in its proper location and brightness.

"I never knew it would look this neat," Frank says.

But here's the best news: since we first told his story, the stars have really aligned for Frank. He now gets about 3,500 visitors a summer -- enough to not have to work in the papermill anymore. And as for where business goes from here, he says the sky's not the limit.

"This is going to get noticed, and it's going to take off like a rocket to the stars," he predicts.