I just ran into Kevin Farley, who stars as a bumbling Michael Moore in the new film "An American Carol." The trailer for the film, which you can see here, debuted on "The O'Reilly Factor"; O'Reilly himself has a cameo in the movie, which the Fox host describes as "a spoof of the far left."

Farley was working the halls of the RNC to promote the film, which screened for about 2,000 people here earlier this week. 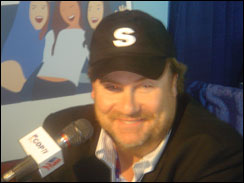 (CBS/Brian Montopoli)
"We thought it would be smart to come here and talk to the people that would like it the most," Farley said, shortly before Gail Stanart, a Texas delegate who had been standing next to Farley, broke in to say she had seen the film and found it "hysterical."

"It's so over the top that I don't think it will be offensive, but it also has a message," she added. "It makes you think."

Farley, who has never spoken to Moore, describes himself as a "conservative person." He said Moore is "a pretty nice guy, probably," but that people can get justifiably upset by some of the things he has said in the past.

Farley said he is not working in any way with the McCain campaign or the RNC, adding that he did not expect the film to have an impact on the outcome of the presidential election.

"I don't think it will at all," Farley said. "I think people will make up their own mind. A movie won't make up their mind for a person."