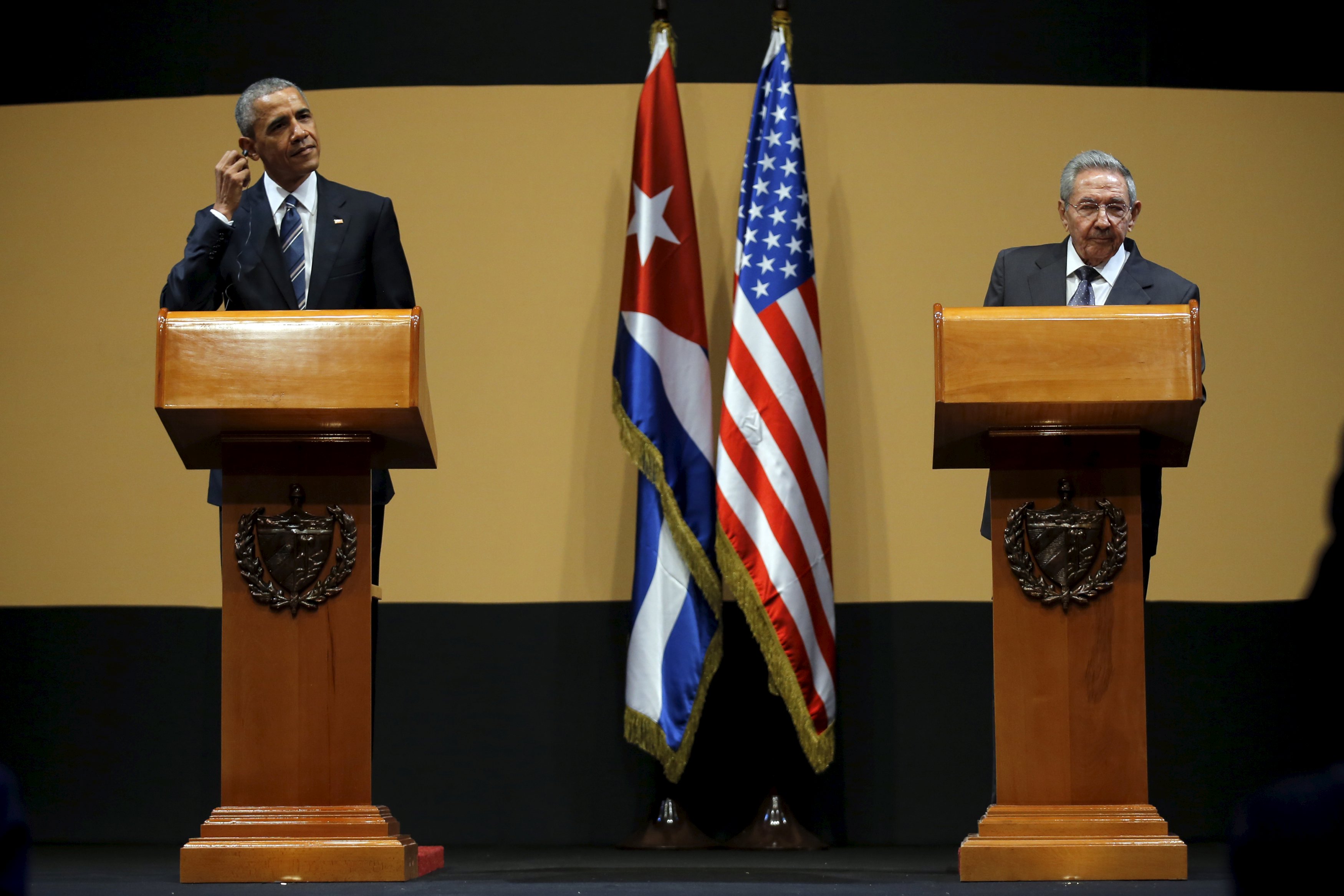 President Obama repeated his call to Congress on Monday to lift the trade embargo between the U.S. and Cuba and stressed that Cuba's efforts to improve human rights could speed up that goal.

"The bulk of changes that have to be made, with respect to the embargo, are now going to rely on Congress making changes," Mr. Obama said standing next to Cuban President Raul Castro at a historic press conference in Havana, Cuba.

Congress has not been very "productive" in this presidential election year, he said, but added there's "growing interest" among lawmakers to lift the embargo. A dialogue surrounding human rights issues, he added, could help accelerate that outcome.

"The embargo is going to end. When? I can't be entirely sure," he said, but added, "The path that we're on will continue beyond my administration."

Mr. Obama said the U.S. and Cuba still have some "very serious differences" on democracy and human rights and said he had "frank" conversations with Castro on those issues.

"As is true with countries around the world, we will continue to stand up for basic principles that we believe in," he said. "America believes in democracy. We believe in freedom of speech and freedom of assembly."

In remarks before Mr. Obama spoke, Castro credited the president with managing to "modify aspects of the blockade," but said it's insufficient.

"The blockade stands as the most important obstacle to our economic development and the well-being of the Cuban people," Castro said, according to an English interpreter.

Castro also said it will be necessary for the U.S. to return the military base at Guantanamo Bay to Cuba, which he said the U.S. is operating "illegally."

The Cuban president took aim at human rights abuses in the U.S., saying, "We oppose political manipulation and double standards in the approach to human rights."

In a statement ahead of the press conference, Mr. Obama said he came to Havana to "extend the hand of friendship" to Cubans and to move on from the U.S.-Cuba relationship of the Cold War era.

"I'm here to bury the last vestige of the Cold War in the Americas and to forge a new era of understanding to help improve the daily lives of the Cuban people," the president said. "I know one visit, and one president, cannot erase the decades of history that have left so many Cubans in poverty or exile. But sometimes the most important changes begin with the smallest step."

Mr. Obama, who arrived in Havana on Air Force One Sunday with the rest of the First Family, is the first sitting president in nearly 90 years to visit Cuba.

Their meeting comes more than a year after Mr. Obama announced his administration's policy to normalize relations with the Communist nation.

The president and the White House highlighted all of the progress the administration has made in the last 15 months. Most recently, the Treasury Department authorized new changes that will allow individual Americans to travel to Cuba as long as the traveler has a full-time schedule of educational activities. Some of the changes will also allow Americans to buy and consume Cuban tobacco and liquor abroad.

In December, the two governments reached an agreement to re-establish the operation of regular, direct flights between their two countries for the first time in more than 50 years. The two countries have also re-established direct transportation of mail.

A White House fact sheet released Monday said that the U.S. would be sending, at Cuba's request, English-language specialists to work with the Cuban people on English teacher training this spring and summer. The U.S. will also grant Cubans educational grants and scholarships and will allow university students to study abroad.

In addition, the two countries are planning to facilitate greater cooperation in agriculture, battling illicit trafficking of drugs and combating climate change.

The president and first lady Michelle Obama are scheduled to attend a state dinner Monday night at the Palace of the Revolution. On Tuesday, Mr. Obama is scheduled to deliver remarks to the Cuban people and will attend a Major League Baseball exhibition game between the Tampa Bay Rays and the Cuban National Baseball Team.

After Cuba, the First Family will travel to Buenos Aires, Argentina.