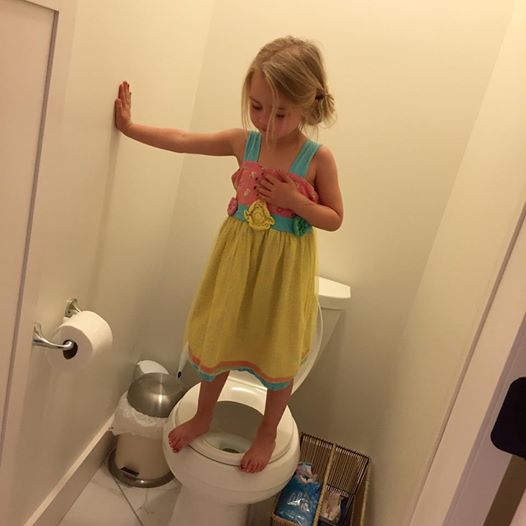 A Michigan mom thought her daughter was just being funny when she was standing on their toilet.

But when Stacey Feeley's 3-year-old daughter explained what she was doing, Feeley broke down, reports CBS Pittsburgh.

Feeley says her daughter was actually practicing a lockdown drill, hiding from a potential attacker.

She posted the photo on Facebook with the following caption:

"Politicians - take a look. This is your child, your children, your grandchildren, your great grand children and future generations to come. They will live their lives and grow up in this world based on your decisions. They are barely 3 and they will hide in bathroom stalls standing on top of toilet seats. I do not know what will be harder for them? Trying to remain quiet for an extended amount of time or trying to keep their balance without letting a foot slip below the stall door?"

Her post came just days after a gunman in Orlando carried out the most deadly mass shooting in American history.

Some users have written, "This is heartbreaking, no child should have to worry about such things, what a sad reflection of today's society."

Another wrote, "Thank you for showing us how this insanity is already effecting our children from early age on."

On Monday, a divided Senate rejected rival plans to bolster the federal background check system and moved toward blocking other proposed curbs on guns.

The two competing measures for keeping firearms from terrorists also faced defeat along mostly party lines, with each side accusing the other of dangerous political grandstanding and inflexibility. Democrats said the GOP proposals were unacceptably weak while Republicans faulted the Democrats' plans as overly restrictive.

None of four amendments to pending legislation garnered the 60 votes necessary to advance in the 100-member chamber.