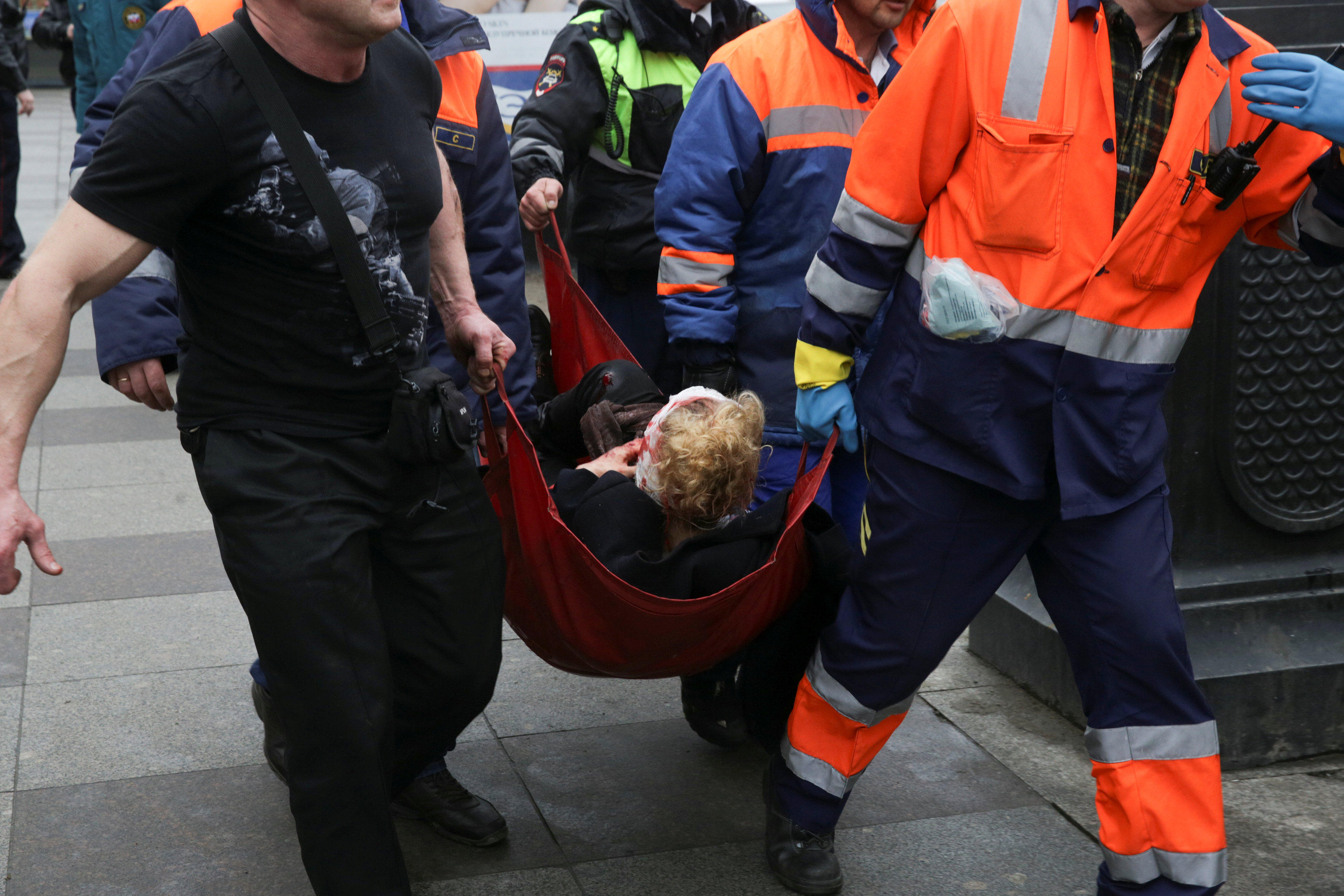 Russia’s National Anti-Terrorism Committee said the death toll rose to 11 and that another 45 people wounded in the St. Petersburg subway bombing were being treated at hospitals.

Within two hours of the blast, Russia authorities found and deactivated another bomb at a separate busy St. Petersburg subway station, Vosstaniya Square by the Moscow railway station, the anti-terrorism committee said. Russian law enforcement agencies said that the device was rigged with shrapnel.

There were initial reports of another blast, but Russian authorities only confirmed one explosion.

There was no immediate claim of responsibility for the incident, which came as President Vladimir Putin visited St. Petersburg -- his hometown. The Interfax news agency said law enforcement agencies were searching for two suspects.

The explosion rocked the train as it traveled between stations about 2:20 p.m. The driver chose to continue on to the next station, Technological Institute -- a decision praised by the Investigative Committee as aiding evacuation efforts and reducing the danger of more deaths from passengers trying to walk along the subway’s electrified tracks.

Ambulances gathered at the entrance to the Sennaya Ploshchad metro station in the heart of St. Petersburg. According to officials, the device -- according to some reports, packed with shrapnel -- was detonated between Sennaya and the Technical Institute station.

Social media users posted photographs from one subway station in the city center, showing people lying on the floor and a train with a mangled door nearby.

“Everything was covered in smoke, there were a lot of firefighters,” Maria Smirnova, a student on a train behind the one where a bomb went off, told the Dozhd television channel. “Firefighters shouted us to run for the exit and everyone ran. Everyone was panicking.”

Putin was in St. Petersburg on Monday for talks with Belarusian President Alexander Lukashenko, and went ahead with the talks after appearing on Russian television to speak about the attack.

“Law enforcement agencies and intelligence services are doing their best to establish the cause and give a full picture of what happened,” Putin said. He offered his condolences to the victims’ families.

The entire St. Petersburg subway system, which serves some 2 million riders a day, was shut down and evacuated. Uber and other taxi services reportedly ran out of available cars in St. Petersburg Monday after the attack as people tried to make their way out of the city.

Russia’s National Anti-Terrorist Committee said security was immediately tightened at all of the country’s key transportation sites. Moscow officials said that included the subway in the Russian capital.

After the blast, France’s Interior Ministry was reinforcing security measures on public transport in the Paris region. French Interior Minister Mathias Fekl said in a statement that the decision was a “measure of precaution” after the explosion in St. Petersburg. The statement provided no further information about the reinforced security, and Fekl’s office did not immediately respond to requests for comment.

The U.S. condemned the attack as “reprehensible.”

“We extend our deepest condolences to the loved ones of those who were killed, and our thoughts and prayers are with those injured in the attack and with the Russian people,” said a statement by Mark Toner, acting spokesperson for the State Department.

White House Press Secretary Sean Spicer said, “Attacks like these on ordinary citizens just going about their lives remind us that the world must work as one to prevent violence in all forms.”

President Trump earlier denounced the attack as “absolutely a terrible thing.” He spoke Monday before a working lunch with Egypt’s President Abdel-Fattah el-Sissi.

Russian trains and planes have been targeted repeatedly by Islamic militants, mostly connected to the insurgency in Chechnya and other Caucasus republics.

The last confirmed attack was in October 2015 when Islamic State militants downed a Russian airliner heading from an Egyptian resort, killing all 224 people on board.

The Dec. 25 crash of a Russian plane carrying Red Army Choir members near the southern city of Sochi is widely believed to have been due to a bomb, but no official cause has been stated for the crash that killed 92 people.

Suicide bombings in the Moscow subway on March 29, 2010, killed 40 people and wounded more than 100 people. Chechen rebel leader Doku Umarov claimed responsibility for the attack by two female suicide bombers, warning Russian leaders that “the war is coming to their cities.”

A Moscow-to-St. Petersburg train was also bombed on Nov. 27, 2009, in an attack that left 26 dead and some 100 injured. Umarov’s group also said he ordered this attack.

Russian airports have also been hit by attacks. On Jan. 24, 2011, a suicide bomber blew himself up at Moscow’s Domodedovo Airport, killing 37 people and wounding 180. The same airport in August 2004 saw Islamic suicide bombers board two airplanes and bring them down, killing a total of 90 people.

In October 2015, Russian security officials said they had thwarted an alleged plot to launch a terror attack on Moscow’s public transportation system, with support from the Islamic State of Iraq and Syria (ISIS). Officials said the group involved in the planning comprised 12 Russian citizens, including at least one who had been trained in Syria.  All were men in their 20s from Chechnya, a predominantly Muslim region in southern Russia where an Islamic insurgency still simmers after two separatist wars.

Hundreds of Russian nationals, many from the restive Northern Caucasus where Chechnya is located, have traveled to Syria and Iraq to fight alongside ISIS and other extremist groups, and many have returned to Russia.

CBS Radio News correspondent Alec Luhn noted Monday that ISIS has declared a presence in the Northern Caucasus. The group’s first attack on the Russian homeland was in August 2016, when two men pledging allegiance to ISIS attacked police at a checkpoint near Moscow with axes and guns. They were both killed, and the officers only wounded.

Bagpipes and kilts: Scottish traditions that never go out of style

An Italian village celebrates its many centenarians