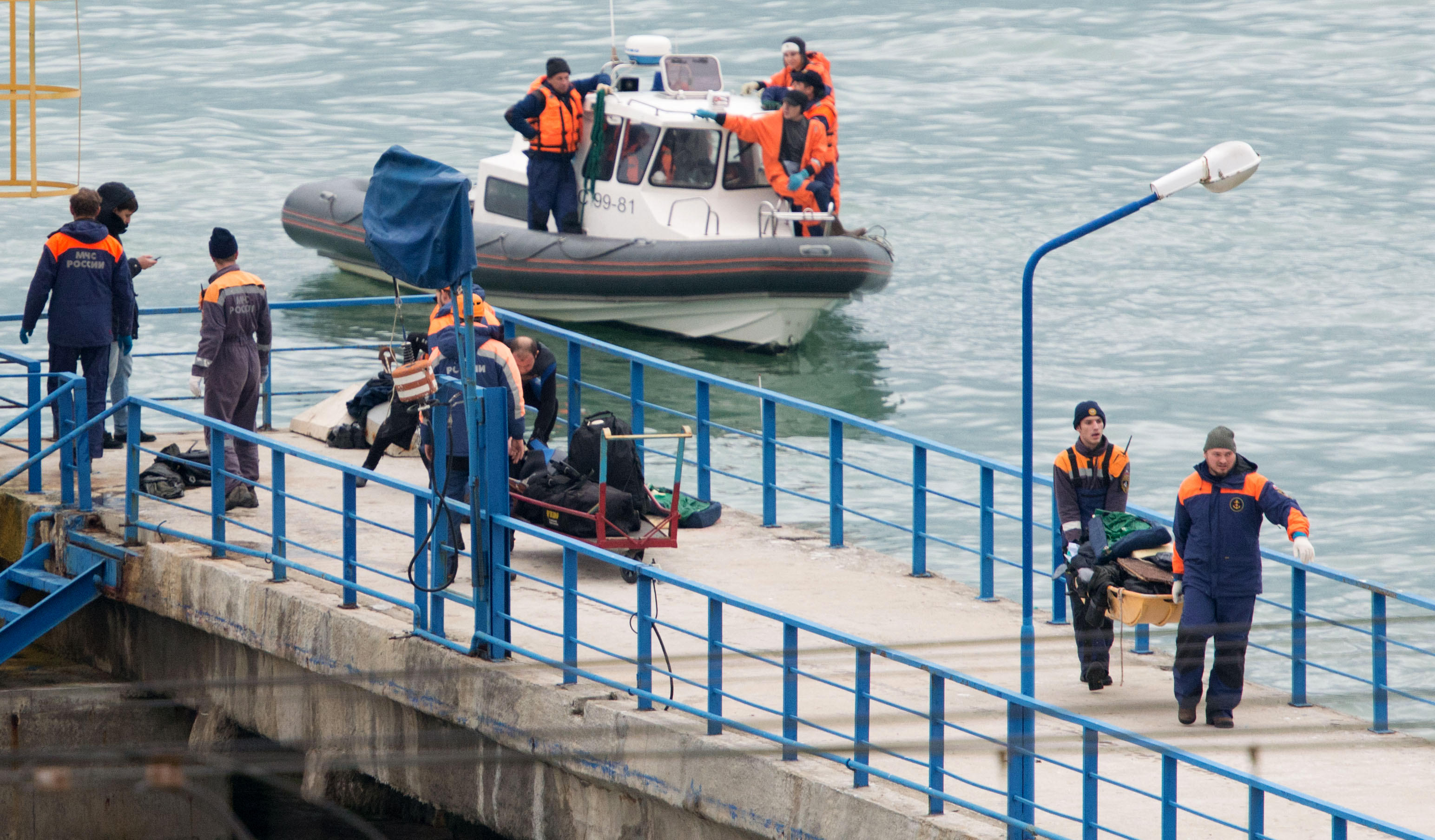 SOCHI, Russia – Backed by ships, helicopters and drones, Russian rescue teams searched Sunday for victims after a Russian plane carrying 92 people to Syria crashed into the Black Sea shortly after takeoff. Investigators said they are looking into every possible cause for the crash, including a terror attack.

All 84 passengers and eight crew members on board the Soviet-built Tu-154 plane operated by the Russian military are believed to have died when it crashed two minutes after taking off at 5:25 a.m. in good weather from the southern Russian city of Sochi.

More than 3,000 people — including over 100 divers flown in from across Russia — worked from 32 ships and several helicopters to search the crash site, the Defense Ministry said. Drones and submersibles were also being used to help spot bodies and debris. Powerful spotlights were brought in so the search could continue around the clock.

Emergency crews found fragments of the plane about 1.5 kilometers (1 mile) from shore. By Sunday evening, rescue teams had recovered 11 bodies and Transport Minister Maxim Sokolov said fragments of other bodies were also found.

The wreckage and human remains were being brought to shore in Sochi, CBS News producer Svetlana Berdnikova reported.

Asked if a terror attack was a possibility, Sokolov said investigators were looking into every possible reason for the crash.

That contradicted an earlier statement from investigators denying that there could have been any act of terrorism on board, Berdnikova reported. So far, she reports investigators say they have not seen any evidence of fire or an explosion in the wreckage that has been recovered.

Russian lawmakers said that the military plane was tightly secured, and security is particularly tight in Sochi, which hosted the 2014 Winter Games and is regularly visited by Putin, who has a residence there.

The plane belonging to the Defense Ministry was taking its world-famous choir, the Alexandrov Ensemble, to a New Year’s concert at Hemeimeem air base in Syria’s coastal province of Latakia. Those on board also included nine Russian journalists and a Russian doctor famous for her work in war zones.

“We will conduct a thorough investigation into the reasons and will do everything to support the victims’ families,” Putin said.

In Moscow, flowers piled up on the sidewalk outside the choir’s home base as residents mourned their loss. “It is a real tragedy for the whole country, especially because of the people who were on board,” Berdnikova said.

The Black Sea search area — which covered 10 square kilometers (nearly 4 square miles) — was made more difficult by underwater currents that carried debris and body fragments into the open sea.

Sokolov said the plane’s flight recorders did not have the radio beacons common in more modern aircraft, so locating them on the seabed was going to be challenging.

The Tu-154 is a Soviet-built three-engine airliner designed in the late 1960s. More than 1,000 have been built, and they have been used extensively in Russia and worldwide. The plane that crashed Sunday was built in 1983, and underwent factory check-ups and maintenance in 2014 and earlier this year, according to the Defense Ministry.

Magomed Tolboyev, a decorated Russian test pilot, said the circumstances of the crash indicated that all on board had died.

“There is no chance to survive in such situation,” he said, according to the Interfax news agency.

While the cause remained under investigation, some experts noted that the crew’s failure to report a malfunction pointed at a possible terror attack.

Russian planes have been brought down previously by terror attacks.

In October 2015, a Russian plane carrying mostly Russian tourists back from vacation in Egypt was brought down by a bomb over the Sinai Peninsula, killing all 224 people aboard. Officials said the explosive device was planted in the plane’s luggage compartment. The local affiliate of the Islamic State group claimed responsibility.

In August 2004, two Russian planes were blown up in the skies over Russia on the same day by suicide bombers, killing 89 people. A Chechen warlord claimed responsibility for the twin attacks.

In the last year, the Russian military has repeatedly flown Russian singers and artists to perform at Hemeimeem, which serves as the main hub for the Russian air campaign in Syria. This plane was carrying performers for New Year’s, the main holiday for most Russians.

The passenger list for the Sochi plane released by the Defense Ministry included 64 members of the Alexandrov Ensemble, including its leader, Valery Khalilov. The ensemble is the official choir of the Russian military and also includes a band and a dance company. The choir sang “Get Lucky” at the opening of the 2014 Winter Games in Sochi, becoming an instant online sensation.

The toll on the choir was reported to be devastating. Viktor Yeliseyev, head of the rival choir of the Russian National Guard, said “most singers of the choir have died.”

Also on board was Yelizaveta Glinka, a Russian doctor who has won wide acclaim for her charity work, which has included missions to war zones in eastern Ukraine and Syria. Her foundation said Glinka was accompanying a shipment of medicine for a hospital in Syria.

“We never feel sure that we will come back alive,” she said when Putin presented her with an award earlier this month. “But we are sure that kindness, compassion and charity are stronger than any weapon.”

Syrian President Bashar Assad was among numerous foreign leaders who sent a condolence note to Putin, saying he received the news “with deep grief and sadness.”

In recent years, Russian airlines have replaced their Tu-154s with more modern planes, but the military and other government agencies in Russia have continued to use them. While noisy and fuel-guzzling, the plane is popular with crews that appreciate its maneuverability and ruggedness.

“It’s an excellent plane, which has proven its reliability during decades of service,” veteran pilot Oleg Smirnov said in televised remarks.

Still, since 1994 there have been 17 major plane crashes involving the Tu-154 that have killed over 1,760 people. Most resulted from human error.

In the latest previous deadly crash of a Tu-154, a plane carrying Polish President Lech Kaczynski and 95 others crashed in April 2010 while trying to land at a military airport in Smolensk in western Russia, killing everyone on board. Investigations by both Polish and Russian experts blamed pilot error in bad weather, but Polish authorities have launched a new probe.

Russia’s military involvement backing Assad in the war in Syria has also made it a target in recent days. The Russian ambassador to Turkey, Andrey Karlov, was shot and killed at a photo exhibit in Ankara last week by a gunman who shouted “Don’t forget Aleppo, don’t forget Syria!” before he was gunned down by police.