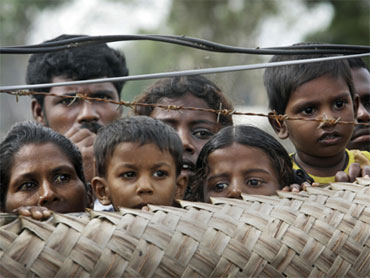 Sri Lanka will release next month the remaining 136,000 Tamil refugees still in the squalid and overrun government camps where they've been detained since the country's civil war ended six months ago, a top official said Saturday.

Some 300,000 war refugees were forced into the camps after fleeing the final months of the government's decades-long war with the separatist Tamil Tiger rebels, which ended in May.

The ethnic-minority Tamils are being held against their will. More than half were released in recent months amid pressure from rights groups and foreign governments. Authorities say nearly 136,000 people remain detained in the camps, which are guarded by soldiers and strung with barbed wire.

Basil Rajapaksa, a senior adviser to his brother, President Mahinda Rajapaksa, said Saturday the refugees will be free to return to their villages after Dec. 1, and the camps will be completely closed by Jan. 31.

Sri Lanka pledged in September to the U.N. that all civilians would be sent home by the end of January.

Rights groups say the detention is an illegal form of collective punishment for the ethnic group. Access to the camps is heavily restricted.

The government has maintained that Tamils must be screened for rebel ties and detainees' villages de-mined before the camps can be closed.

On Saturday, Rajapaksa said the military was given the green light to release the detainees as no security threats remain. Detainees can settle in areas cleared of mines, he said.

Government troops routed the Tamil Tigers in May, ending their 25-year fight for an independent homeland for the country's minority Tamils. An estimated 80,000 to 100,000 people were killed in the violence.
By Associated Press Writer Eranga Jayawardena