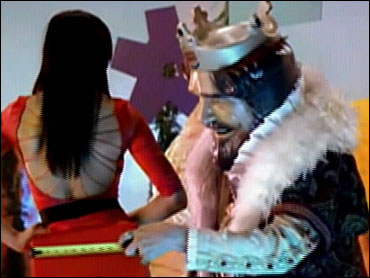 The "Squarebutts" commercial makes use of the Sir Mix-A-Lot song "Baby Got Back," and shows women dancing and shaking square-shaped posteriors dispersed with clips of the popular cartoon character. The ad is supposed to promote the fast food chain's new Spongebob-themed children's menu.

"Spongebob Squarepants is a character for pre-schoolers," said Joe Kelly of the organization Campaign for a Commercial-Free Childhood. "And it's being used in this highly sexualized ad that objectifies women and that's an incredibly outrageous message to be sending to kids."

Burger King responded by saying the ad is aired "only during shows targeting adult audiences" and "is intended to show that even adults can have fun."

Kelly said that many young children may have still seen it.

"I saw it, as did many, many other people during the final games of the NCAA men's basketball tournament, which is an event a lot of families watch together"

The Early Show played the ad for parents, and their reactions were mixed.

"Models shaking their butts? 'Baby Got Back?'" one mother said, pointing to her daughter. "Next thing you know, this one will be doing it."

A different father disagreed, saying "It's beautiful. There's nothing indecent about it. I like it."

The final couple was split down the middle on whether the commercial was indecent.

"You think it's fine?" the wife asked her husband.

"It's just people dancing," he answered.

"You didn't look very closely, then," she responded.