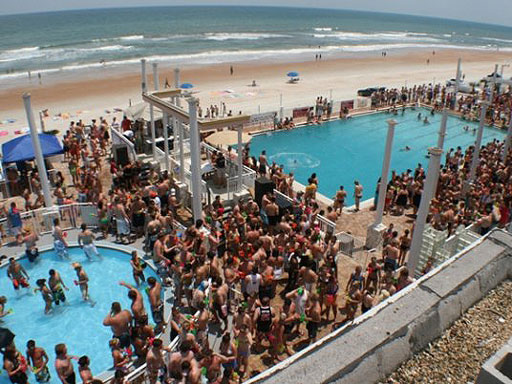 DAYTONA BEACH, Fla. (CBS/AP) In just one week, six rapes were reported in Daytona Beach. Not coincidentally, the week in question was the first week of spring break, when students flock to the city.

Only one arrest has been made, but authorities are investigating to find suspects in the other rapes.

In five of the cases, drug or alcohol use was a factor, police said. Three of the victims were unconscious when assaulted, according to the Orlando Sentinel.

Daytona Police Chief Mike Chitwood told the Sentinel, "I can't tell you how many of these incidents aren't reported." He said the reasons women don't report the crimes are embarrassment and not wanting their family to find out.

Four of the alleged rapes occurred behind a popular beachfront restaurant, one happened at a resort and spa, and one happened on the mainland.

Last year there were 41 sexual assaults in Daytona Beach; rapes typically increase in March because of vacationers on spring break, said police.

Woman allegedly behind wheel in fiery, deadly L.A.-area crash in custody
Thanks for reading CBS NEWS.
Create your free account or log in
for more features.
View CBS News In
CBS News App Open
Chrome Safari Continue
Be the first to know
Get browser notifications for breaking news, live events, and exclusive reporting.