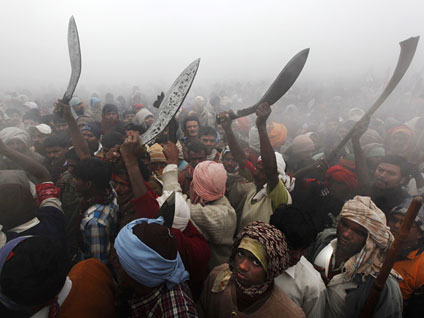 Lawmakers grilled Mark McGwire and baseball officials about steroids, then asked the National Football League why its testing isn't tougher. They heard from doctors about the perils of performance-enhancing drugs and from parents of high schoolers who committed suicide.

Now they are ready to act.

Members of a House subcommittee have written a bill to govern drug testing across American pro sports, aiming to bring them in line with the Olympics. The leaders of another panel planned to join Sen. John McCain, R-Ariz., in introducing their own legislation soon.

The commissioners for the four major U.S. sports leagues were summoned to Capitol Hill for hearings Wednesday and Thursday to explain their drug testing policies and discuss the proposed law. The heads of the leagues' player unions also were invited.

"It would be easier for the sports if they would work with us, instead of against us," said Rep. Cliff Stearns, R-Fla., chairman of the House Energy and Commerce subcommittee holding Wednesday's hearing.

"One purpose is to ask these commissioners and the union people why they should not be subject to the same standards that are used in the Olympics," Stearns said. "The burden is on them to explain why. The second purpose is to get their views on the bill and ask them for suggestions to make it more palatable to their way of thinking so we can just get an understanding of what they would accept."

Last month, the Florida Republican introduced the Drug Free Sports Act, which would have the Commerce secretary oversee drug-testing rules for pro sports. It calls for a two-year suspension for a first offense and a lifetime ban for a second; leagues that don't comply would be fined at least $5 million.

Stearns' panel was to hear from NFL commissioner Paul Tagliabue and union head Gene Upshaw on Thursday. Also that day, Stern, Hunter, Washington Wizards guard Juan Dixon and Houston Rockets trainer Keith Jones were to testify before the House Government Reform Committee, which questioned McGwire, Selig, Jose Canseco and others in March, then called upon Tagliabue and Upshaw last month.

Lawmakers on both panels say they believe rules for steroid testing and penalties should be standard across the spectrum of American professional sports, something most everyone testifying this week is likely to argue against.

"Unfortunately, sometimes you have to legislate at the federal level, if not to solve the problem, at least to begin to address it," said Rep. Joe Barton, R-Texas, chairman of the House Energy and Commerce Committee. "I'm not saying the Stearns bill is the perfect bill, but it is a strong bill. There could be changes, but I think something similar to that could become law."

Baseball banned steroids in September 2002 and instituted mandatory 10-day suspensions this season. A little more than a month after his sport's policy was slammed for being too weak during an 11-hour congressional hearing, Selig proposed sweeping changes. He wrote to Fehr, suggesting that starting in 2006, major league players be given 50-game suspensions for a first positive test for steroids (a season has 162 games), 100-game penalties for a second positive test and lifetime bans for a third. Selig also wants to ban amphetamines.

The MLS can end a player's contract after one positive test, while the NHL doesn't test for performance-enhancing drugs at all.

While boosting strength, steroids can lead to heart attacks, strokes, cancer, sterility and mood swings. Using most steroids without a doctor's prescription for medical purposes has been illegal since 1991.