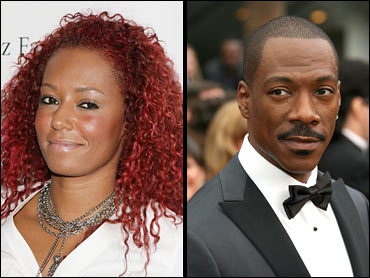 Brown, who was known as "Scary Spice" when she performed with the '90s pop group Spice Girls, dated Murphy last year and has maintained that the child is his. The 32-year-old singer gave birth to Angel Iris Murphy Brown on April 3. She listed Murphy as the father on the birth certificate.

Brown also has an 8-year-old daughter. Murphy has five children from his marriage to Nicole Mitchell Murphy.

Murphy's spokesman, Arnold Robinson, has consistently denied to comment about Brown's claims. On Friday, he said he would not confirm the paternity test. "We do not comment on Mr. Murphy's personal life."

When asked about impending fatherhood in December, Murphy told a television reporter: "And I don't know whose child that is until it comes out and has a blood test. You shouldn't jump to conclusions, sir."